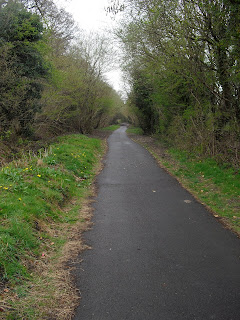 Alright, some more time in Aber.

I met Harriet for some Irish dancing.  It was pretty good.  The people there were all really nice.  Though, it didn't seem that different from the Welsh dancing I'd done.  Maybe, Irish dancing is done in more of a circle rather than long lines but basically very similar.  Maybe, faster twirling as well because I do remember being quite dizzy.

Mainly, I've just been practicing and learning new tunes.  I average around four or five hours of practice a day when I'm not traveling.  Not sure how many tunes I've learned at this point.  My brain started to hurt so I turned to some other creative ventures.

I wrote a new arrangement of Mae'r Ddaear yn Glasu (The Earth is Greening).  The harp part is pretty good and I didn't really mess with the melody rhythms which I later found out was important for Welsh language lyrics.  I also wrote a 7/4 groove.  I'm not sure why but 7/4 grooves seem the most natural for me to write.  I used to play them by accident all the time on the bass.

I was missing home so I learned Northwest Passage by Stan Rogers.  I found it tough to get through the tune.  Every verse reminded me of some piece of home.  The words of the last verse are particularly poignant.


"How then am I so different, from the first men through this way.
Like them I left a settled life, I threw it all away.
To seek a Northwest Passage, at the call of many men,
To find there but the road back home again."
I wrote a tune for Martin and Sille.  Decided my old originals weren't speaking to me in the same way and that it was high time to write some new ones.  So I wrote a song for them as a way to thank them for everything.  It's a fairly pretty tune and definitely my happiest yet.  It may be slightly sappy but I don't care.

My brain doesn't want to learn more tunes.  But my ears have definitely opened up.  I'm starting to pick up tunes rather quick on the harp.  Remembering them in the long term is another matter.

Next, onto another session in Dolgellau...
Hwyl.
Posted by gwdihw y nos at 17:21