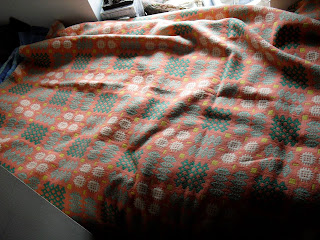 Back in Pencader once more.  I rehearsed with Julie some more.  The tunes were really falling into place.

All of the songs are amazing but one in particular that she wrote is absolutely heartbreaking.  It nearly made me cry, it's so beautiful.  We played most of the day.

Julie and I went for a nice walk through the hills and farms to clear our heads.

Ceri told a story about his uncle who owned a pub.  Prince Charles wanted to see the pub because the fireplace in there was 500 years old or something like that.  His uncle refused them entry because he was closed.  The prince's guide said, "But this is the Prince of Wales!"  To which he replied, "I don't care who is, you can't come in!" and he promptly slammed the door in his face.

I told this story of the blacksmith shop in Capel-y-Wig.  When my great-grandmother died, she had left the shop to my dad but my great-uncle tom claimed it wasn't hers to leave to my dad because it was on his land supposedly.  Eventually, he had the building torn down.  My Dad and his brother Huw had their revenge though.  Uncle tom's son David was getting married.  It was a very fancy, black tie tux affair.  My Dad and his brother showed up to the wedding wearing bright red and yellow cardigans.

To this, Ceri Ffliwt said, "Ah yes, 'Sarhad'."  Sarhad, I think means a slight or an injury which then has to be re-payed.  It's a type of revenge, Welsh tribal justice.  Welsh culture is still very tribal, perhaps minus the 'elders'.  Sarhad was codified in the "Laws of Hywel Dda" way back in 954AD-ish.

Ceri showed me some great Welsh tunes - galliards.  He was saying that the galliard dance form came from Europe, but eventually died out there but stayed in Wales.  This is in part because galliards are good for Penillion singing with the harp.  He said that Llio Rhydderch knew a bunch of galliards.  He also clarified some of the dance forms that I wasn't understanding.

I played him my tune, Aderyn Du Aberdâr and this french tune called "Quand je bois du vin Clairet" which apparently is a dance form called a "tourdion", very similar to a galliard.  He thought it had a very Welsh feel.  Of course, like most countries in Europe, Wales has been influenced by French court culture.  Fair enough.