Well, I'm never gonna catch up but I'll try...
I worked on tunes on the Wednesday.  Did I see Harriet?  Sai'n cofio nawr.  I've met with Harriet several times, trading tunes and ideas.  She's extremely talented and generous but more about Harriet later.

Definitely went to Llangranog on the Thursday.  It took me two hours and two buses to get there.  I walked from this place called Brynhoffnant.  I hitched a ride part of the way down the steep hill.  I went to meet with Pwyll and Enfys first.  I'm related to them through the Foel family somehow but it is quite distant.  They are very good friends of my Dad's from way back.  Met Ceri Ffliwt just outside their house by luck. 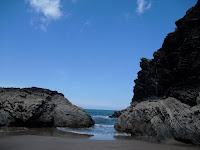 Ceri Ffliwt started talking to Pwyll and Enfys in Welsh and I did my best to follow.  It was all a bit fast for me though and I was making a lot of guesses as to what they were saying.


Ceri Ffliwt later described the meeting this way, "Pwyll PenDyfed opened the door to the gates of Annwn and came out for a chat."

That only makes sense if you're familiar with Welsh mythology which I might write about if I find the time.

(A small aside... Enfys means 'Rainbow'.  Pwyll means 'Steadiness'.  Pwyll in Welsh mythology is the god of wisdom...) 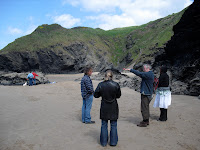 Julie, Martin and Sille were down in Llangranog recording for a TV show.  They were apparently filming up on a cliff.  Pwyll and Enfys were checking it out through their binoculars.  I should mention that Llangranog is basically the area where my family is from.  The area between Cwm Tydi and Llangranog really.  It'd be considered my "Bro" which is Welsh meaning "one's area" or "kin area".

We went to the Pentre Arms.  The man who owns the place is named Mike from Liverpool if I remember right.  He gave me a lift to Cardigan about nine years ago or something like that.  I remembered him though I don't suppose he remembered me.  Said hello anyway. 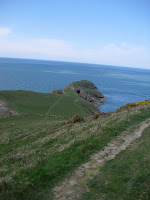 After, we all wandered around the beach and walked along the cliffs all the way to Ynys Lochlyn.  It's a beautiful spot and I'm pretty sure I've never walked that path before.  I think I've only seen the island from a boat, a few years back.  They all thought it reminded them of Arthur's birthplace  (yes, king Arthur was Welsh... possibly Cornish... more on that later...)

It was interesting to watch the four of them together.  A nice group dynamic that, once again, I didn't feel I should interrupt.  Not sure why that's important to me but it is.  Besides, it's always slightly awkward to be the odd one out so to speak.  So I was a quiet observer instead.  Which is a good way to be.  It's a powerful way to learn. 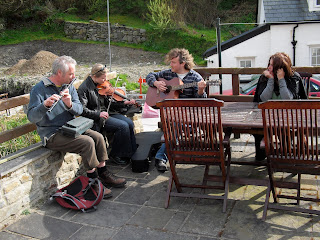 Later, Pwyll and Enfys' son Gary showed up.  We spoke in Welsh from then on in.  Again, did my best with what little I've got.  I asked Ceri Ffliwt, Julie, Martin and Sille to play a couple of tunes, which they did outside on the patio.

The four of us stood and listened to the four of them.  There was a gentle breeze, the valley was lush and green, the gorse in full bloom, hanging with my relatives in my "bro", home of the ancestors, listening to Welsh music.  It was a really sweet moment.  Maybe the sweetest yet...


Caught a lift up to Plwmp with Julie and Ceri Ffliwt and then caught a bus back to Aber.
Next, some time in Aber...
Hwyl. 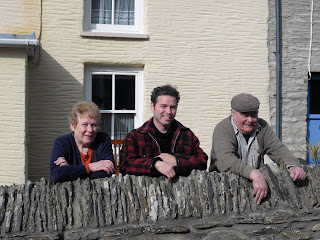 The Jones family, Enfys, myself and Pwyll.
See where I get my height from!
Posted by gwdihw y nos at 15:53