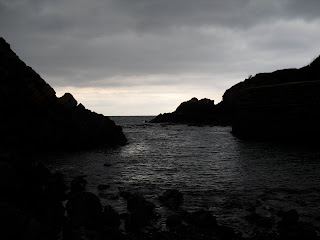 We got up early-ish.  Sille was up already making a potato salad.  We had stayed up real late, into the whiskey, so how she was even moving is beyond me.  But she was chipper as ever.  Me, on the other hand, I was moving very slowly.  Martin, always generous, drove me to the train station in Abertawe and I caught the train to Caerfyrddin.  I waited there for a couple of hours and then caught a ride with Julie and Ceri to Stackpole Centre, which is a beautiful little retreat on the south coast of Sir Benfro.

I met the Twmpath band in it's entirety.
Stefan (drum, bombard, accordian, lute) and Peni (pipes, oboe), Jason (flute, pipes) and Vicky (runs the door), Ceri and Julie, Martin and Sille.  All couples, so I was a bit of a ninth wheel if that's possible.  Not to say that they weren't welcoming because they really were all exceedingly gracious... but bands work in interesting little dynamics.  It can all be thrown off if not careful and I certainly didn't feel like disturbing their energy. 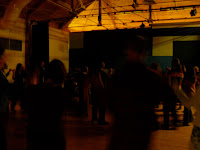 I decided to take a walk to the ocean.  Jay carefully explained to me how to find the right path to the beach.  As I walked I found I was in a strange mood, even amongst all the lush green fields and trees.  There were dark purple storm clouds above, the wind was cold.  Fortunately, the pixies lead me astray to an amazing hidden away little cove.  Just me and the ocean and I hold my arms out to be purified.

The dance was great fun as always.  Vikki (Victoria) was there with her dad, Dai.  They were the ones who had helped to organize this particular dance.  I also met Simon and Stirling, both dancers and their little daughter, Nora.  Met a fiddle player named Jackie.  She's such a character, just full of life.  One dance form we couldn't figure out at all, and we nearly danced ourselves out the door!  And that's how I met Jackie... she was laughing so much.  The band sounded great as always. 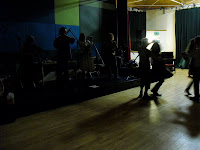 After the gig, we jammed until about 4 in the morning.  For awhile, everyone was playing and Dai and Vikki danced in the kitchen.  Eventually, everyone trickled off to bed.  The last of us were Jay, Sille, Stef and Jackie.  Jackie had her fiddle and played some of her old timie tunes.  We mostly played through a bunch of Welshie tunes.  Near the end of the night, I was starting to fall asleep but did hear Stef play some great Corsican tunes.  He ended with a really wonderful Corsican lullaby.  So, half-asleep, I had to answer with the Welsh lullaby, "Cysgu di fy mhlentyn Tlws".
Then I crashed on the couch. 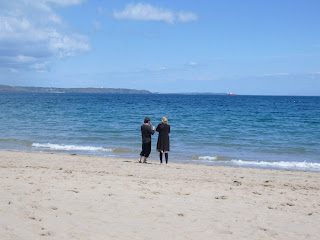 The food was all home cooked and great.  Of course, I'm such a mooch and naturally took the free food.  Peni and Ceri played some tunes on the pipes.  I love the sound of the pipes.  It reminds me of those highland competitions my sister used to dance in.  Anyway, we eventually (after a whole lot of music making) made our way to the beach.  The proper beach, not the cove I was in.

Penny and Stef pulled out their instruments, pipes and bombard.  They stood facing the ocean and played a song for her.  It was incredible!


Reminded me of the time in Bella Coola... I'll post that story later... 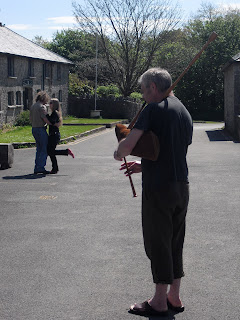 Then we all started Breton dancing on the beach, making great big swirls in the sand.  It was a wonderful experience and heart warming.  It was perfect.  It reminded me of when I was in Yellowknife.  I played at a festival (Folk on the Rocks) up there with a latin band, of no consequence.   I saw some great music while I was there but the highlight was at the very end of the week.  The First Nations closed the festival with a round dance that was open to all.  An old Dene man danced in front of me and a young Inuit woman was behind me.  We circled and circled to the drum and time stood still.  There was a spirit of oneness and togetherness and peace.  A blissful moment.

This was just like that... amazing, spontaneous and beautiful.  The sun was so hot and the ocean was cold.  I had a nice lay down on the beach and chilled out.  We walked back along the cliffs.  There's one spot where a cave leads to a lone beach.  Saw a lot of cool birds - oyster catchers, I think.  I had a great chat with Jay and his girl Vicky.  She's an amazing and strong woman.

Back at the ranch, the group played a bunch of tunes in the parking lot.  Then they all started to dance.  First Martin and Sille did a waltz to Ceri Ffliwt playing the pipes.  It was really touching.  Then they all worked on forms together.  It was fun to watch! 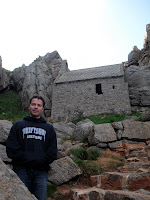 Then we formed an impromtu down and dirty village band - flute, clarinet, violin and trombone.  It was so funny and fun, I was literally jumping up and down!  We marched down to the magical kids park built by the Tylwyth Teg (faerie tribe).  Hell, yeah!

Then it was time to leave.  I left with Ceri and Julie and they decided to detour to St. Govan's church which is clutching to the side of the cliffs in a remote part of Penfro.  Rocks and ocean, vivid colours and caves.  A little stone altar lies beneath the church.  The nave of the church itself was built into the rocks, a miniature womb that reminded me of the inner cavern of the Newgrange burial mound. 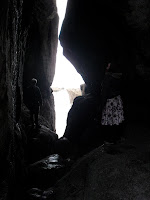 The name Govan comes from Gof (pronounced Gov) or Gofannon, the blacksmith god.  People try to pass him off as a real saint (apparently Irish) but come on, it's highly doubtful.  For instance, one of the the legends of St. Govan is this... when the church bell was stolen, he walked outside the church and struck a huge stone and it rang louder than any bell ever could.  If that isn't a blacksmith story... it must have been a way for the monks to continue the worship the old gods within the christian veneer.

It was so still and quiet.  There was a cave at the bottom, where the cliffs met the ocean.  The sound in there was stunning.  It was peaceful and calming. 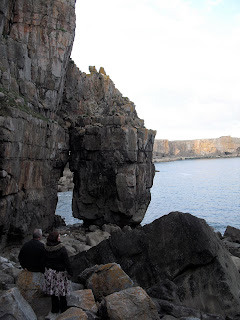 It really cleared my head because I was in a strange mood during the weekend.  Just feeling slightly awkward... but this place was truly magical.  And it spoke to my Blacksmith heritage.  Whenever I talk to my dad about it, he always says, "Blacksmiths are magic."

After leaving that, we traveled to Carew and saw the big castle there and the high cross.  I believe the cross is the biggest of it's kind in Wales at a height of 13 feet.  It was built for prince Maredydd in the 11th century.  The sun was setting...

We eventually made our way back to Pencader.
Thank you Julie and Ceri for that... diolch o galon!