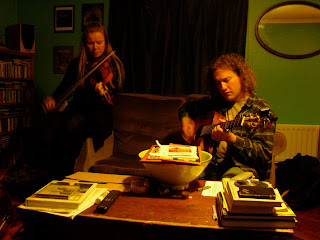 I woke up a bit late the first day.  Sille made me some more Estonian porridge, this time with some tobasco sauce.  Tobasco, salt, butter, milk and basil.  Oddly refreshing...

Sille and I worked on some tunes while Martin was at work.  She taught me some background harmonies to an Estonian tune.  It was cool to sing in Estonian but I couldn't quite get the accent right. I also learned a couple of Estonian sacred tunes on the trombone.  Trombone with the hiiu-kannel sounds really beautiful.

My chops aren't in shape anymore so it was tough to play softly enough.
I have to admit, that part of my trombone playing I'm really proud of.  I might not have been the best trombone player in Alberta but I was definitely one of the loudest and also one of the softest.  To do it, you have to be willing to let the tone of the instrument change completely.  It's interesting.  At it's softest, it can take on a voice-like quality or you can add some fuzzy air and it starts to sound flute like.  Or by rounding the tone, making the mouth more cavernous, you can sound like a classical player, or by filling the horn with big fat air you'll sound like an old ska dog or you can send the air straight through the horn like a laser beam and then stop the sound with your tongue in order to sound funky or you can over blow and create a sound like ripping sheet metal.  Good for latin gigs.  But I'm digressing again... 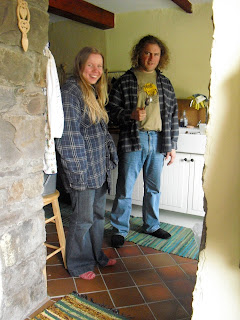 I had written this tune a few days earlier called "Aderyn Du Aberdâr", which means Blackbird of Aberdare.  While I was walking with Paul and the boys in Aberdare, we heard this blackbird and I tried to transcribe what it was singing.  When I got home and played what I had written, it didn't sound anything at all like the blackbird singing.  But it made for a pretty nice tune anyway.

I assumed the tune was a jig but I guess it isn't really a proper jig.  Sille took to calling it the Ukranian jig because the timing is pretty weird.  The thing is I don't really understand the dance forms yet, so I'm writing things I shouldn't but then I suppose that's okay too, though it would be nice to have a basic grounding in the forms.  I think Sille was a bit frustrated by my silly tune.  But Martin and Sille worked it out in the end and came up with a pretty nice arrangement.

One morning, I did make porridge Canadian style.  Cooked plain in water, a little salt, dark brown sugar and cinnamon and then add milk after.  Sille seemed to actually like it!

Over the next couple of days, we worked on a few Sild tunes.   I played harp for the most part, but also trombone on a couple of tunes.  We also worked on a version of Y Dau Farch.  Martin created a great accompanying part to the tune.  Really cool chord choices, much better than the ones I had written.  Sille sang a runic tune that only used four notes, very rad.  Martin kept playing even though he was bone tired from work.  It was fun to watch him, nearly out cold on the couch and then the music would take hold of him and he couldn't stop himself from playing.  It was great!  We continued to work on a few arrangements of their tunes and played through some Welsh dance tunes.  They started to show me the different dance forms, which was very cool.

Sille started playing this tune on the hiiu-kannel which was familiar but I couldn't recognize it.  Crazy enough, it was "New Years (Yves')".  A really beautiful tune that No More Shapes wrote.  Martin and Sille had taken the time to learn the tune which they'd heard on Youtube.  There's a second video of No More Shapes there which is really funny.  Watching the vidis, I realized how much I miss those guys.  That group was amazing to work with.  And I love both Hammie and Jay like brothers.  The boys are continuing as No More Shapes, but without me of course.  Which I'm sorry about...   Anyway, the tune is dedicated to Hammie's step-dad, Yves, who had helped him get into music and away from drug-running.  It's a gentle, tender tune and I was really touched that Martin and Sille wanted to play it.

At some point during the week (it's all a bit blurry now), we walked over to Ystradglynais to a really nice pub and had a couple of pints.  Cwm Tawe (Swansea Valley) is really beautiful.  Even so, you can tell Martin is a Gower boy and that he misses it.  When he tells stories about it, he gets that look.  A look I can recognize.  The look of hiraeth.  Hiraeth doesn't really translate into English.  The closest you can get is either nostalgia or longing but that doesn't really reach the depth of the word... hiraeth, is a deep pain in your heart...

One final word about Martin and Sille...


I've played with some amazing musicians over the years.  People who are open and beautiful and loving and great players. 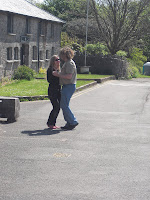 But of all the musicians I've ever played with and of all the great music I've played, I've never heard anything like when Martin and Sille play together.

It's tough to describe.
They're both great musicians to start with and beautiful people.  And when they play together, something unique and amazing occurs.

They're so unabashedly in love... and it's there in their music for all to feel.  There's a subtext, in each note they play, in each little cute look they give each other.  It's loving and open, exposed and raw, honest and genuine... and most importantly, it's so incredibly joyful...

To be allowed to be a part of that, is a great privilege.  A great gift.

And it warms this old cynic's heart.
Lordy, I've become such a softy... guess I always was...


Anyway, great food and great company.  Martin and Sille both have really great humour and are quick to laugh.  It makes me happy to be around them.

Friday night, the three of us drank through a bottle of whiskey.  Which is only important to tell for the next story.

Next, off to the twmpath in Stackpole, Sir Benfro...
Hwyl.
Posted by gwdihw y nos at 17:03