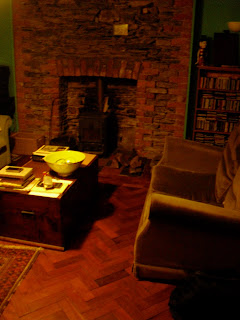 Well, it's been awhile and I'm having trouble remembering now all the things that have happened.  And quite a lot has happened.  So forgive me if the next few posts are somewhat spotty.
Here we go...

I traveled to Julie's house in Pencader.  Ceri Ffliwt was away in Cornwall celebrating May Day and doing some recording with Christine Cooper.  Anyway, traveled to Pencader on the bus carrying my harp and my trombone and my knapsack (or rucksack?).  That was interesting.  One fellow on the bus leaned over to me and said, "I brought my harp to the party but no one asked me to play."  Yeah, that's about right.  Guess it's from some song.

Anyway, Julie met me at the bus stop and she helped carry my trombone up that big long hill.  We chilled out for a bit and ate some nice food.  Then we started playing and it was amazing!  Julie's voice is so beautiful and emotive.  We worked on some Welsh traditional tunes and some more on her originals.

Her originals are amazing, emotional and naked and honest.  It's inspiring.  We practiced all through the afternoon, had supper and then practiced some more.  We worked until about midnight, working on arrangements.  I played both the trombone and harp.  I was a little more relaxed this time and started to find my way into the tunes.

The next day we had breakfast, practiced for a couple of hours, ate lunch, practiced for a few hours, ate supper and then practiced again until it was time for bed.  It was amazing!  Julie told me lots of great stories too.  I may come back to them if I get a chance.  I must admit, I've never really had this type of experience back home.

I don't mean to slag Edmonton, because I do know many great musicians there, people who are really beautiful and who really care.  It's just there does seem to be a general malaise blanketing the city.  Whereas, the musicians I've found here are relentless.  Full on, all the time, playing, playing and then playing some more.  Then listening to music, then talking about music and then playing and playing again and again.  It's almost unbelievable!  I lack the vocabulary to express how incredible the experience is.

Julie talked about possibly doing some gigs together which is dead cool.  It's a crazy honour.  I don't know how to explain it... actually working and gigging with a musician who's CDs I've admired for so long, to work with my favourite Welsh singer... what a feeling.  Julie's in a whole different league and there's me still playing for the pee wee team.

Here's something my Canadian friends might understand...  It's as if Bruce Cockburn called me up and invited me to play some of his tunes and then do some gigs.  I think that's about the right comparison.  That's what it's like to be asked by Julie to play.

And I know I've already rambled on about her voice, but it's so beautiful, I feel compelled to say more.
But how can a person explain the ineffable?  How do you explain a voice that is pure expression?   So mournful and heartbreaking, so joyful and then so haunting... a voice that is a celebration of life.  Her voice is the Earth, grounded and then again, it is Annwn, the otherworld where the spirits and Tylwyth Teg wake.  Her voice is the Dusk and it is the Silence.  There are no words graceful enough, no words deep enough... 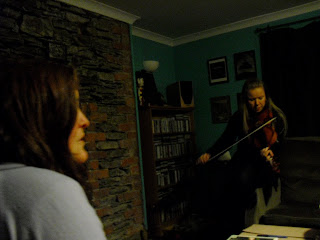 The next day, was much the same.  Breakfast, playing some tunes, lunch and then playing some more tunes.  It was exhilarating and exhausting all at once.  I was really stretched to the ends of my talent and abilities and creativity.

For supper, I made borscht and then Martin and Sille came over.  Poor Sille couldn't have been fond of the borscht, she's not keen on dill, and I put a ridiculous amount of dill in it.  Luckily, Julie made some curry as well.  I don't remember specifics about the conversation but I do remember smiling and laughing loads.  Martin and Sille are great fun to be around!

After supper, we all played some tunes together and then Julie, Martin and Sille worked on a couple of tunes that they'll be recording for some tv show for S4C, the Welsh language channel.  It was fairly late before we all decided to call it a night. 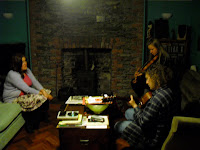 Then, I hopped in the car with Martin and Sille with my harp on my lap... yes, seriously!  A good laugh actually.  Somehow, Sille scrapped her pinky finger on her clogs which must have hurt something fierce but she hardly complained at all.  I would have been crying!  And Martin had to get up early for work which must have been a drag for him to drive all the way home.  Anyway, I was pretty tired and with the harp in my lap I was nearly asleep.


Finally, made it to Ystalyfera.  I stayed up and listened to what Julie and I had recorded.  I ended up being awake until about 4am or so listening to them all and then sending them over email to Julie.  I couldn't get over how many tunes we had gotten through.  Truly incredible!  Magic...