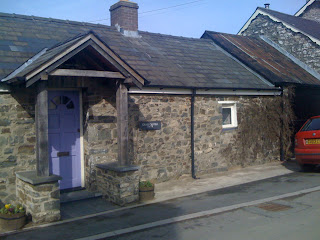 I have to admit, I was pretty sore the next day from weeding.  Especially my hands.  Aunty Susan and I had talked a little about my great-great grandfather Thomas Owen (son of Catherine Jones and Owen Owen) and his wife (my great-great grandmother) Sarah Evans of the Blaenllan household.  So we decided to take another trip, this time to Llantysiliogogo as that's where Thomas is buried.

We took the bus just up the road to Cross Inn and then began our walk.  The first thing we came to was the village Caerwedros.  It was here she showed me the old Norman fort, not much left but a tiny mound.  The fort wasn't in use long as the Welsh burned in down within twenty years of it being built.

The name Caerwedros suggests a Roman influence (Caer the name generally used for Roman style forts).  This is the village my great-great grandfather John Jones y Gof (the blacksmith) is from.  At the top is a picture of the old smithy shop.  Of course, it's been turned into a holiday home of sorts.  Not much need of blacksmiths anymore.  When my dad was growing up in Wales, through the 40s and 50s, the blacksmith was still essential in that part of the world.  My dad still is quite knowledgeable about the art and nearly owned the blacksmith shop in his village.  But that's for another time... 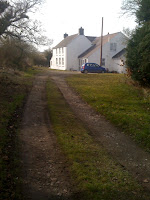 Next we visited the Blaenllan household which my great-great grandmother Sarah Evans grew up in.  Her parents (my great-great-great grandparents) were David Evans and Ann Jones, farmers.  The house is in very good shape and has obviously had a lot of work done to it.

Onwards, we finally reached Llantysiliogogo.  The church, parish and village here are named after the saint Tysilio who died in 640AD.  Llan (Lh-an), in Welsh, came to mean an area on which a church was built.  The original meaning meant a sacred enclosure.  This ancient earthen enclosure is still visible on this particular church ground and is very circular in shape.  It's possible this embankment is extremely old, predating the Romans and belonging to the iron age Celts (ca. 1000 BC.) 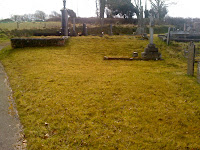 There is also a short standing stone here, possibly from the bronze age, possibly neolithic.  In 1719, a sun-dial was cemented into the top of it which is slightly odd.  What a strange juxtaposition.  When the church was rebuilt they found, buried beneath the floor, a massive neolithic flat stone.  Apparently, it was too heavy to move so they just left it there and built over top.  This stone would seem to suggest that this site was seen as sacred since at least that time which could easily be dated to around 3000 BC.  To think my ancestors may have been worshipping here over 5000 years ago is humbling. 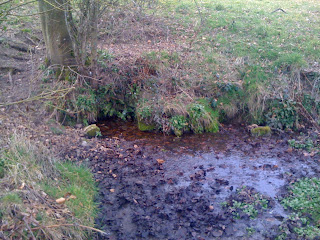 On the far side of the embankment, there is a holy well situated in a small dip in the land.  There are two trees surrounding the spring, and a semi-circle of stones marks the springs head (you can just make them out under the moss).  Aunty Susan figured the short stone spring wall to date back to around 400 AD with the arrival of christianity into Wales.  Holy wells and springs are worshipped throughout the Celtic world and I have no doubt that this tradition predates the arrival of christianity and is a holdover from the druidic religion.  Perhaps it even predates the coming of the Celtic druids and is a holdover from the bronze age Beaker folk (proto-Celts).  Of course, that can't be certain but it does seem reasonable.

The Welsh, at one time (up until the 1800s), would take small pieces of rowan wood and wrap it in colourful strips of green, red, yellow, blue and white cloth.  This would be thrown into the well and a wish or prayer be said.  The colours of the ribbons do remind me of Tibetan prayer flags.  Generally, these wells were used for healing purposes.  Pins were also sometimes used in place of the rowan.  Of course, I made an offering of some coins as I didn't have any rowan handy.

Typically, most wells are associated with female saints.  Originally, it would have been a Celtic goddess that guarded the spring or simply was the spring itself.  It isn't a stretch to suggest that many of these saints (both male and female) are in actuality old names for Celtic gods / goddesses or even possibly of druids.  I haven't been able to find the name of this particular spring yet but I will. 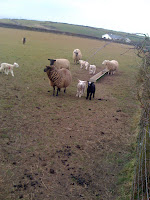 * A little note... Thomas Owen is buried here but turns out there is no headstone.  He was probably too poor to afford one, although it may just simply have been lost.

We saw lots of sheep along the way.  One interesting breed, Aunty Susan called 'badger sheep' because their markings make them look like a badger.  There were plenty of lambs running around and one particularly cute black lamb caught our eye.  Welsh farmers tend to keep at least one black sheep for luck.  I don't know the story behind that belief but promise to find out.

We took a path through the old woods near Cwmtydu.  It mainly ran beside a small river and was very peaceful.  After crossing the valley and over a wooden bridge, we climbed back up through an long archway of trees (very much like a cozy tunnel) and finally onto a path closer to the ocean.  We didn't go on the proper coastal path because can be slightly treacherous "for an old pea" as Aunty Susan refers to herself.  On the way home, Aunty Susan pointed out some farms close to Cei Newydd and said the boundaries hadn't changed since the bronze age.  Unbelievable! 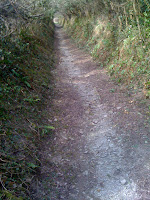 The snow drops are in bloom and the daffodils are finally opening up.  They're a bit late because Wales had such a terrible winter.  The gorse is also flowering, with it's mustard yellow flowers.  Aunty Susan said that gorse blooms nearly all year round.  "Gorse doesn't bloom only when kissing isn't fashionable." Aunty Susan is full of wonderful sayings like that.

Eventually, got back home for a total walk of about six miles.  How Aunty Susan does it is beyond me.  I'd forgotten the crazy sharp incline of these Welsh hills, they look so gentle from a distance.

The cold wind finally got to me and I felt really feverish that evening.  My head was on fire.  Wore three shirts, pants and socks to bed.  In my delirium, all I could think of was my grandfather, who died at sea of meningitis at the young age of 37.  I thought I might die in the same way and though I'm not even a bit religious, I must admit, I asked my grandfather to help me through the night.

No worries, managed to live and only slightly warm and achy the next morning.
Next, a day off in Cei Newydd and I make some cawl...
Hwyl. 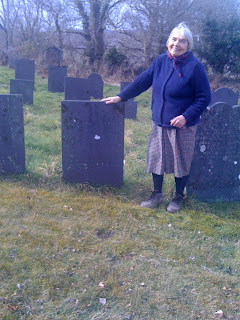 Picture of my Aunty Susan, a wise Welsh woman
Posted by gwdihw y nos at 19:02