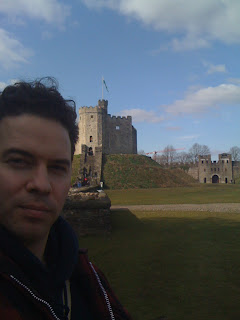 I arrived in London with no problems. Even got to sneak my trombone on board. The pilot must have been particularly good because my ears didn't even pop on the landing. I was sitting beside a Canadian military gun machinist heading to Afghanistan which was both interesting and disconcerting. He had another two month tour there. He was a very friendly fellow, I think originally from New Brunswick. I suppose that paradoxical nature pretty much sums up Canada really. Dylan Thomas once described Swansea as "an ugly, lovely town" and I can't think of a more appropriate way to describe Canada, and more specifically, Alberta.

After landing, I caught the National Express bus from Heathrow to Newport.
Not very eventful. The view does get more and more beautiful the closer you get to Wales. Went through Bristol, which looked like a very clean city. Apparently, there's a very good scene for music here. It's only about an hour out of Cardiff, so I will have to come back at a later date to check it out. Peter Gabriel's studio is also nearby and at some point I would very much like to see it.
To get to Wales, you have to cross over the massive bridge across the Severn river, which very quickly turns into the Severn Estuary, then the Bristol Channel and then the Celtic Sea. The Welsh name for the Severn is Afon Hafren (River Ha-vren), Hafren being the Celtic goddess associated with the river. Hafren was then Romanized as Sabrina which was then anglicized as Severn.
Anyway, you cross the river and then there you are, in Wales. I stopped in Newport rather than Cardiff as my cousin Melody thought it'd be quicker for her to pick me up. I waited in Newport for a couple of hours. Newport seems like a terrible city. It's about as rough and grimy as it gets, with lots of crazy looking characters with possibly the strangest haircuts I've ever seen. Unbelievably hard people. No worries though. I'm pretty used to the nutters by now. It was great to see Melody again and she brought her two boys, Cosmo and Bob with her. They've grown quite a lot since I'd last seen them and were very fun to chat with.
In the evening, Paul (Mel's husband), came home from a game of soccer (err... football...) which he plays twice a week. We had a great visit and drank some wine. Mel, Paul and I have had some really great times together in the past so it was really wonderful to catch up. I crashed pretty hard after that.
It did feel strange being in Wales again. Especially after such an emotional departure from Canada with the knowledge that I'd be in Wales for awhile. It felt very surreal. The jet lag didn't help at all with the general feeling of loss and groundlessness.
There it is. More about Cardiff later...
Hwyl am y tro.
Posted by gwdihw y nos at 09:23