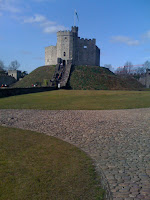 On Thursday, went with Mel to pick the boys up from school. We visited her friend Helen, a Welsh speaker who lives in Llandaff, a community within Cardiff. She took me into the Llandaff church which was very impressive. Most of it had to be rebuilt after the war as it took heavy bombing. Llandaff still has the feel of a little village right in the middle of Cardiff city.  Unfortunately, didn't take any photos.
I must say that Cos and Bob are doing pretty well in school. Cos got into Cardiff High which he was really excited about. As he put it, "A proper respectable school, that is!" That a boy! Both of them are very happy to have me around and Melody has offered to let me stay indefinitely which is an incredibly nice gesture. I made a curry for them one night, to earn my keep a bit. I'm also going to be helping her with the gardening.

On the Thursday, Paul and I went to some pub (like any other pub really) that was having a battle of the bands. There were four bands, all of which were pretty good. My favourite band, and the band that won, was Cheviot Hill.  Kind of an indie thing with a cahone player in place of drums and two backup singers.  Their sound reminded me of the Calgary indie scene a little.  I talked to a couple of them after and they were interested in jamming (me on trombone).  Paul had at least five pints and I only managed three. Then his silly friend virtually forced us to have a jagr bomb each - the worst and most dangerous drink ever made. Well, Paul ended up being sick afterwards.  I was fine but then I knew what to expect.  Terrible, awful, sweetly-sick drink that leaves you more high than drunk.
I have to stop briefly here to mention the fashion in downtown Cardiff because it inevitably makes me laugh.  I get the impression that Cardiff people are trying dead hard to be as cool as Londoners or even (god forbid) Americans (though they'd never admit it) and yet somehow are not quite 'getting' it.  In fact, completely missing the point.  The women in downtown Cardiff wear an unseemly amount of make-up, caked layer upon caked layer, with clothes that are cheap hipster knockoffs inexplicably turned into yuppie implosions of the bland and boring.  Most of the men are equally as dull, trying too hard to look like indie hipsters but far too clean and tidy.  They're not even dressed with metro-sexual undertones but more like metro-sexual overload.  Grunge has come back in fashion here, minus the grunge, if you catch my meaning.  Which leaves a horrible impression of being surrounded by fake plasticky people.  Not all of Cardiff is like this, but that's the overall feeling of the downtown and bay area.  It's all fine though, because the seriousness with which they take it all makes me laugh even harder.
On Friday, I went to Cardiff Castle. It's my favourite spot in Cardiff. It's dead centre of downtown and is surrounded by gorgeous Bute park. Once inside the walls, Cardiff city, with all it's noisy people and noisy cars, just disappears. I could sit in the grounds for hours, it's so peaceful.
The site has been used at least since the Roman invasion. The Romans built the stone walls in about 50 AD but apparently had to rebuild it at least four times. A portion of the thick Roman walls are still intact.  They used to have this great dank tunnel to creep into in order to view them which was very cool and atmospheric.  It's now been opened up so you can see the old wall from the coffee shop and is lit with gaudy fluorescents.  Just one more example of Cardiff missing the mark. "Shine that s**t!" as my friend Eric would say. 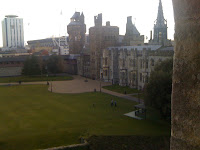 Anyway, the next people to rebuild here were the Normans. Not much is left from that period, except for the keep, moat and some of the foundations. The outer gothic walls are a late addition, built by the Marquis of Bute and his architect, William Burges.  It has a fantastic Victorian fairy tale like quality and it's well worth paying for the tour as the tour guides are great fun.  There were lots of Chinese tourists that day and I did get asked to take some photos of them.  Peace signs on top of Cardiff keep.  Way too perfect!
My last day in Cardiff was very chill. Cos and Paul left early for a skiing trip in France. I went to town and with Mel's money, bought Bob a vidi game. A little wine in the evening and then off to bed.
A good week all around.  Still not feeling quite human yet, but getting better.
Next, I was off to the West coast. But more on that later...
Hwyl.
Posted by gwdihw y nos at 06:09