I named this blog “A Journey in Wales” as a small homage to Giraldus Cambrensis, who wrote a book called "A Journey through Wales".  I'm certainly no Giraldus but I count him as a great inspiration and mean this only as a tribute. 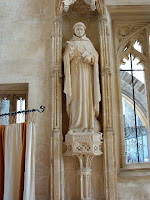 Giraldus (1146-1223), a monk who wrote over twenty large
volumes of work, was also known as Gerald de Barri and Gerallt Gymro.  He wrote two famous books about the Welsh - “Itinerarium Cambriae” (A Journey through Wales) and “Descriptio Cambriae” (A Description of Wales) which chronicled the lives of the people around him. What’s most interesting about Giraldus was that he was three-quarters Norman and one-quarter Welsh.  He clearly loved both cultures and was often torn between the two.
Naturally, I identify with that, being first generation Welsh-Canadian.  Part of both worlds but not really belonging to either.
Giraldus fought desperately to become the archbishop of St. David's and for it to be wholly independent from the English church.  It was a losing battle, but one he took upon himself full heartedly and that’s something to admire.  Here’s what he wrote to pope Innocent.
“Because I am a Welshman, am I to be debarred from all preferments in Wales?  On the same reasoning so would an Englishman in England, a Frenchman in France, and Italian in Italy.  But I am sprung from the Princes of Wales and the Barons of the Marches, and when I see injustice in either race I hate it.”
Gwenwynwyn, the Prince of Powys at that time, had this to say of Giraldus and his fight with Cantebury, "Many and great wars have we Welshmen waged with England, but none so great and fierce as his who fought the king and the archbishop, and withstood the might of the whole clergy and people of England, for the honour of Wales."
Giraldus has a very natural style that is honest and candid, full of wit and charm.  He was certainly more of a storyteller than a historian.   When writing about Wales, he described both their good and bad characteristics.  One early translator of his work, David Powel, left out all the bad parts written about Wales, leaving a mangled bit of work.  What a strange thing to do.  I have met other people who are equally upset by his writings.  But look, people are people, both good and bad all at once, and these books are an invaluable source of the intimate details of Welsh life during that period, however exaggerated or understated.  Giraldus himself explained this better than I could.
“Since, therefore, no man is born without faults, and he is esteemed the best whose errors are the least, let the wise man consider everything human as connected with himself; for in worldly affairs there is no perfect happiness under heaven.”
In his own time, the struggle of Giraldus endeared him to the Welsh.  Llewelyn Fawr said this of Giraldus, "So long as Wales shall stand by the writings of the chroniclers and by the songs of the bards shall his noble deed be praised throughout all time."   Strangely since then, Giraldus has been largely ignored by the Welsh until recently.  Apparently the first good translation was done by Dr. Henry Owen in 1889.  I wonder if there have been any Welsh poems in recent years dedicated to Giraldus?
I've recently come to the conclusion that it's not necessary or worthwhile (if fact, rather dangerous) to be a pure hard-liner Welsh Nationalist (more on this later...) but I do think it’s really important for people living in Wales to speak Welsh, and for them to be aware of the history, poetry, music and culture.  That’s why I really like this quote from Giraldus which is both touching and full of hope.
"During the military expedition which king Henry II made in our days against South Wales, an old Welshman at Pencader, who had faithfully adhered to him, being desired to give his opinion about the royal army, and whether he thought that of the rebels would make resistance, and what would be the final event of this war, replied, ‘This nation, O king, may now, as in former times, be harassed, and in a great measure weakened and destroyed by your and other powers and it will also prevail by its laudable exertions; but it can never be totally subdued through the wrath of man, unless the wrath of god shall concur.  Nor do I think, that any other nation than this of Wales, or any other language, whatever may hereafter come to pass, shall on the day of severe examination before the Supreme Judge, answer for this corner of the earth.’"
Sing it, brother.  Sing it.
Da boch chi.
Posted by gwdihw y nos at 16:47