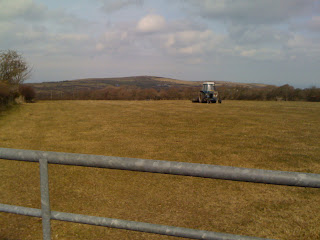 I had seen my Aunty Susan the day before and we had decided to make the trek to Capel-y-Wig.  She asked if I might help her weed her Grandfather's grave site and I happily agreed to do so.

We caught the bus from Cei Newydd to Pentregat and then walked for two miles to Capel-y-Wig.  (Capel means chapel)  Even though Aunty Susan has bad arthritis you'd never know it.  And she's full of interesting stories.  She's written several books, one detailing the lives of some our ancestors, the Owens of Penparc and Foel.  She's got a new book finished, due this spring, about the parish surrounding Cei Newydd.


Along the way, we were able to see Penfoel and the Foel house in the distance.  Penfoel is one of the taller hills in this area.  The other side drops off dramatically into the ocean.  The crest of Penfoel is where my relatives have their ashes spread and where someday mine will be as well.  The Foel is the name of the house where my great grandmother, Jane Owen, grew up.  It sits at the side of Penfoel and it is through the Foel household that I'm related to Aunty Susan.

Jane Owen married Captain John Jones, son of the blacksmith, and they lived in a farmhouse called Carnowen.  John (my great-grandfather) was a sea captain and died very young, in his early thirties.  The Foel was left derelict for years but was recently bought, refurbished and painted bright blue.  Mel, Paul and I once visited the house when it was in ruins and had a run in with a ghost there but I'll leave that story for another time.

The Welsh have the interesting habit of naming their houses.  Apparently it's an old tradition that dates back to Babylonian times and is common throughout large parts of Europe and Britain.  But I really don't know that much about it.  I do know that Welsh people often take on nicknames, sometimes in reference to their job (such Thomas the milk or Owen the post), sometimes from the name of their house or sometimes from the name of their town.  For example my great-great grandfather, also John Jones (father to Capt. John Jones) was usually called John Caerwedros (village name) and was sometimes known as John y Gof (the blacksmith).

My dad's family grew up in a house across from Capel y Wig.  It's original name was Pen Lon Las (Top of the Blue Lane) but my grandfather renamed the house Gwalior after having a vivid dream about it.  My grandfather was a sea captain and also an amazing poet.  I've adopted the name Gwalior for the moment to distinguish myself from all the other Ceri Joneses here, as there are quite a few of us.  I hope someday to buy the old farmhouse back but that might be just a dream.

We made it to Capel y Wig, past the Romani covered wagon and sat for a quick lunch.  The work on the Gillies grave site was hard and it took me about three hours to finish it completely.  Even then, I still could have done more.  The Capel y Wig graveyard has the commemorative stones for my Uncle Hugh and Aunty Liz, my grandfather John Owen-Jones, my grandmother Muriel Stephens Jones, my great-grandmother Jane Owen, my great-grandfather Capt. John Jones, as well as my great-great-great grandmother Catherine "Catrin" Jones and my great-great-great grandfather Owen Owen (also known as Owen Penparc).  There's also plenty of cousins here but it's a bit hard to keep track of. 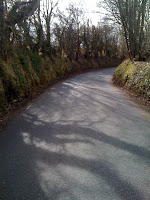 I didn't take any photos of all that but next time I will.  Here's one of a proper Welsh hedge.  Not like the hedges most people think of.  These hedges have stone walls inside and are covered with dirt and grass and all sorts of native plants and trees.  They also tend to be quite tall and wild looking.

We walked the two miles back to Pentregat and just barely made the last bus back into Cei Newydd.  I had a great time with Aunty Susan.  She's very sharp and witty, a great story teller, a true historian and quite a character. Her house is packed floor to ceiling with books and she also collects doll houses and must have about seventy so far.

That night, I had another great supper with Sam and Geraint and another peaceful evening warming up in front of the fire with a nice glass of wine.  Seriously?