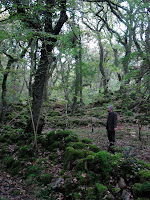 
The last post was a bit long (or rather vastly too long) but I did want to say a quick word about all the musicians that were at Yscolan and give them my deepest thanks.


First there was Sarah.  Sarah lives near Llandysul and we may have vaguely met before at the Twmpath in Abercych but I very definitely drank too much wine at that one.  Anyway, Sarah had only started learning the flute a few years ago but she played it so beautifully.  We played a couple of nice deuawd together and it was a real treat.  Her attitude was one of 'it's never too late!'


Sarah's friend Heida was there, all the way from Germany.  She had tried to come to Yscolan a couple of years ago but on the journey there found out she had a brain tumour.  She's now fully recovered thankfully.  Heida is a very graceful and fluid flute player.  She also plays an early medieval German bagpipe which has the sweetest tone I've ever heard out of a bagpipe.  Heida has a wonderful sense of humour and such a joy for life.


I think I met Chris next.  I really enjoyed Chris's style of playing the flute.  For one thing, he had made his own flute that has such a unique earthy tone and that he plays with fervour and great style.  He's also a very accomplished mandolin player.  Chris, who has an easy laugh, is able to speak Welsh quite well and I think he lives near Carmarthen.


Efa is an absolute force of nature.  I decided to nickname her Robin for some reason.  Anyway, she played several instruments (bagpipe, pibgorn, fiddle, mandola) and moved from tune to tune much like a cat.  Obviously very free spirited, incredibly intelligent and musical.  Efa was able to speak German with Heida and Sarah which was great to listen to.  She now lives near Peni and Steff, very close to Bethlehem, Wales.


If I'm remembering correctly, Susanne was originally an artist who'd taken up the concertina.  I remember she said she preferred how musicians were always hanging out together.  What a lovely player she is.  The only way to describe the sound of her concertina would be lonely.  Such a lonely, mournful sound.  Susanne is of Jewish ancestry all the way from north England.


Jonathon is a very gentle person who plays guitar and is a buddhist.  He was always picking very interesting chords that seemed to be a mix of folk and jazz.  He taught us this wonderful mazurka that he'd written which was incredibly beautiful.  I believe he had played with Kate previously to Yscolan.  He came all the way from London.


Lisa (Kate... for some reason I want to call her Kate) arrived late and at first I didn't understand her until I heard her sing.  It was so moving!  She played the concertina as she sang, great clusters of chords, and then she entered this space, a whole different cosmos... heartbreaking really...  It was so amazing to watch and listen to.  She's also a beautiful flute player and is all the way from London.


It was a great mix of people who gave me an experience I'll never forget.  And to Yscolan himself, I bow deeply in heartfelt gratitude.