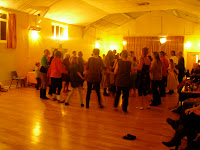 On the weekend there was finally another Abercych Twmpath.  This Twmpath is a great event hosted by Simon which brings the little village together and people of all sorts - Welshies, hippies and arty people alike.  I think it's got to be one of my top favourite events.

Elsa showed up there with a couple of family members.  It was great to see Elsa though I didn't have much of a chance to visit with her at the actual dance.

And alas, no irish girl this time around. Drueni!  lol!  Anyway, I played my harp on a couple of tunes which I think went okay.  It's hard to say exactly but I did have a lot of fun.  Martin did a great job of calling as always.  Tough, tough gig to call and play at the same time.  The four of them sounded fantastic together as they always do.
Christine showed up during the evening.  I seem to remember trying to get her to dance but I'm not sure that she did.  She's going to be in Wales for awhile longer so that's good.  She'll probably be moving to Brighton at least for a spell, which, in my books, is a shame.  Shame for Wales to lose such a good musician.  Although, she's sure to do well wherever she is.  I drank too much wine as per usual.  At the end of the night, the bar decided it was a good idea to simply give me a bottle of wine and that was the end of that!
Once again, an amazing dance...
Afterwards, we all made our way back to Pencader and jammed until the early morning hours.  It was a good crew - Christine, Martin, Sille, Julie, Ceri "Ffliwt" and Elsa.  I had the chance to play some great tunes with Elsa.  She's such an amazing player, delicate and emotive.

Apparently Julie made some great food but I didn't really remember.  I was too focused on the harp so to speak.
I know we played a ton of great tunes and at one point, we played Roaring Hornpipe with the chords that had come to me in the night.  Christine asked me where those were from and I said rather indignantly, "What do you mean?  I wrote them!"  ahh, sweet, sweet wine... how eloquent you make me...


Apparently, I went on about how much higher the standard of living in Canada is over Wales... which is true, but nevertheless rude to say.  Mind, the point I was trying to make, was that even though the grass was not greener in Wales... (errrr... well, the literal grass is very definitely greener...but anyway) ...Wales itself still had other qualities about it that really did make it a more desirable place to be.  See, not so rude after all!
Later, Christine sent me this funny "drunk" poem by Baudelaire, that's really excellent.  Here it is...

"One should always be drunk. That’s the great thing; the only question. Not to feel the horrible burden of Time weighing on your shoulders and bowing you to the earth, you should be drunk without respite.

Drunk with what? With wine, with poetry, or with virtue, as you please. But get drunk.


The next day was a strange one.  A friend of Julie's came over and we all had a nice long chat.  Thing was, the references throughout the entire conversation were British pop culture references that were beyond me.  It was the strangest thing.  They may as well have been speaking Welsh for all that I understood.

Elsa had to leave early and I said I'd like to catch a ride back with her, if it was cool.

She may have thought I wanted to jam awhile longer... or she may have just not wanted to give me a lift... either way, I'd rather take my harp in the car over the bus any day so I very determinedly mooched a ride.