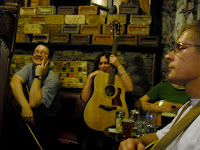 There was a sesiwn in Ystalyfera called Sha Nol Sha Mlan.  It was hosted by Geraint and the Swansea crew.  My boy Chris Reynolds was there naturally.  I'd been rehearsing with Martin and Sille and we all thought it'd be fun to join in.

The session was held in Y Wern, the great local pub with the home brews all named after Buddy Holly.  The pub was really hopping, crazy busy.  I heard a ton of Welsh being spoken that night.

I jumped right in as soon as I could get my harp through the mass of people.  I had heard most of the tunes before but didn't necessarily know them properly but did my best to pull some chords out of the air. 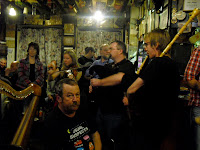 I like how enthusiastic they all are.  Truly, very spirited players.  I tried to get Huw to sing a tune I'd heard from him before but he wasn't into it.  Too bad because I really enjoyed it before... Anyway, the whole crew was there and stupidly enough I can't remember all their names... Let's see, there's Geraint (pibau/chwiban), Huw (banjo/mandola), Chris (gitar/llais), Caradog (ffliwt/telyn), Daniel (bodhran), Tracey (cello/hen oboe)... shoot, there are others for sure, just can't remember... sorry Swansea crew!

Sion 'Drenewydd' and Cornelius were there from the Mandolin group as well. 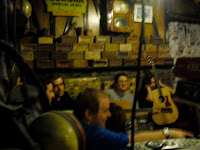 Later in the night, I told Chris he should make a CD of himself singing and I truly meant it.  He's got a great big powerful voice that's not operatic either.  Again very spirited full-on singing that is something to admire.  I think my favourite part of the Swansea group sessions are the group singing.

Check out his singing on youtube... full of fervour and hwyl!
http://www.youtube.com/watch?v=xOl9C1vjAo8&feature=related

Sille and I played a couple of tunes by ourselves which was pretty cool.  Especially the first couple we played together, the bar actually went quite quiet then.  My new harp is louder than I realized and really seems to cut through the din.  Martin didn't really play until the end of the night when there was some more space.

Later, Chris told me he'd read my blog... actually quite a few people in Wales have told me that.  At first I was wigged but then it is kind of nice to know that folks are actually checking it out...

Anyway, as I was saying, Chris had read my blog (previously, I had mentioned that Dolgellau plays very different tunes from Swansea) and he started asking what tunes we play up there, which is exactly the right question.

Sion, who was there as well, replied, "Dolgellau plays tunes that no one else plays."

What I like most about the Dolgellau sessions is that they're slightly subversive.  The thing is, it is a Welsh session but everyone is welcome.  Often English tunes are sung and played, tunes from Quebec, and tunes from Scotland.  Of course, most of it is Welsh.  And the tunes we play may not be common to other sessions but they sure are great.  Great tunes, less popular for a reason I'll explain in a minute.


As the evening drew to a close, I played Ffarwel i Bedwas with Sille.  It's a gorgeous, plaintive tune... one of my favourites.  After the tune, for some reason, Geraint asked Sille, "Is that one of those tunes that Ceri Rhys Matthews made up?"  There was more than a hint of sarcasm in his voice...

Sille answered perfectly, "No, they play it up in Dolgellau."

Which is exactly true.

Now, I've only met Geraint a couple of times but so far I like him just fine.  And I like that he's putting so much effort into setting up these sessions and that he seems to really care about it all...  But, I'm sorry to say, he asked the completely wrong question.  And apologies to you Geraint, but I can't let this slide because this is something that lies close to my heart...


What he should have asked himself first is, "Do I like this tune?"  Then, if yes, "Could you teach me that tune?"  With a possible further inquiry into the origin of the tune.  Because, straight up, the tune is Welsh, whether it fits his Welsh parameters or not.  And besides, who really cares where it came from?  As it happens, I believe one version of the tune is in "Davidson's Two Hundred and Fifty Welsh Airs" but I know there's also a vocal variation as well.  It was this variation that we played.

This reminded me of something that happened to me while I was checking out a harp in Pontypridd.  There happened to be a Clera Welsh folk workshop at the same time.  I was sitting quietly, trying out the harp, playing a Welsh tune called, "Breuddwyd Rhysyn Bach".  Again, another beautiful tune and another favourite of mine.  A woman with a pibgorn walked past and said, "What's that tune?"

To which she stupidly said, "Well, I know lots of Welsh tunes.  Nearly all of them, and I've never heard of that one."

This is so stupid on many levels.


First off, I was talking to Keith "Ffidl" at some point and he figured there were possibly close to 3000 Welsh folk tunes sitting in the National Museum of Wales collecting dust.

Did she truly know 3000 tunes or was it simply that she's slightly more ignorant than she thought?  I'd place my bets on ignorance.  Hell, the best player I know has only managed to learn 1000 tunes.  Jesus, even Gwilym figures he only knows about 200 (I'd wager more than that!) and he's a freakin' prodigy!


Secondly, most of the tunes that are commonly known in Wales are either a) National Airs or b) tunes that have been brought to light by Robin Huw Bowen.

Now, Robin's published quite a few tunes but it should be kept in mind, he's published only the ones that suit his taste.  I'll say it again, he's published tunes that he thinks sound the most "Welsh", whatever that may mean.

Not to knock Robin, but my taste is quite different.  It's not a bad thing, we're both musicians and we're bound to have a difference of opinion over which is a good tune and which stinks.  In fact, I've found a ton of great tunes in Ifor Ceri's old tune books, books that not many people have heard about.

What this literally means, is there are still thousands of tunes just waiting to be uncovered.  T'mod?!  It also means, there are plenty of tunes that others in Wales have discovered but haven't bothered to publish, therefore making them still quite uncommon.


Third thing to remember, musicians don't work the same way that most people do.  Music knows no boundaries.  Music doesn't recognize nation states and artificial borders.  That's what's great about Canada in particular.  I've had the pleasure of playing ska, funk, cuban salsa, peruvian folk, reggae, free improv, swing, dixie, bebop, baroque, big band, avante-guarde, indie... you name it, I've played it all without any fear of being reprimanded.  Canada's not contained by one style of music or culture.  And I bring all that experience to everything "Welsh" that I play.  Am I less Welsh because of it? Please be serious...


The fourth thing is a choice piece of wisdom I picked up from "Corner Gas", a great little Canadian show about a small town in Saskatchewan.  We have these desserts (puddings) in Canada called Nanaimo Bars.  Nanaimo is the town in B.C. where they were invented.  On the show, the mom makes some Nanaimo Bars and when asked about them she replies, "They're not Nanaimo Bars!  They're Nanaimo-Style Saskatchewan Bars!"

Yeah, that's exactly it!  Take a tune from someone like Iolo Morgannwg, who most people make out to be a forger of tunes.  The thing about Iolo was that he was an artist at the end of the day and wrote some cool music.  He wrote back in the 1700s and guess what... He's WELSH and his tunes are over 200 years old!  Doesn't that mean the tunes are actually 'Welsh'?  Where does everyone think all these tunes came from anyway?

By the start of the 1700s, the tunes in Wales had changed from the Robert ap Huw variety into marches, waltzes, jigs, allemandes, hornpipes, etc.  They didn't simply come out of the ancient and unfathomable depths of history.  They were new tunes of the day!  Are they any less Welsh? Of course not!  For that matter, are any of the Welsh hymns, with their new (1800s) words, any less Welsh because someone in Wales decided to change the lyrics?  Of course not!

So, here's my point.  Let's say Ceri "Ffliwt" did write some new tunes... hell, let's take a step further - what if he did change a couple of notes here or there of some old standards... Are the tunes any less Welsh?  Of course not!  He's from goddamn Swansea and is a native Welsh speaker.  If that's not Welsh enough for you, than what is?

And what about me?  I change chords all the time in an attempt to create something that's meaningful for myself and hopefully for others.  But at least I can claim to be Canadian (a great excuse!) and will always claim that until the Welsh give me a reason to say otherwise.


That is to say...
I don't play Welsh music... I play Welsh-Style Canadian music!


I have no interest in nation building and am tired of people trying to find out where my alliances lie.  My Welsh language teacher actually tried to get me to pick sides at one point... duw, ych a fi!  I'm not going to pick between Canada and Wales... that's ridiculous!

My alliances lie with humanity.  And they lie with music.  End of story.

Still... music is something I care deeply about.  And strangely enough, so is Wales.


Next, I finally get to the Twmpath in Abercych and a small session in Pencader...