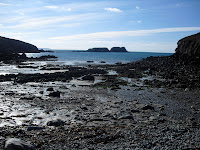 On the Monday, the remainder of the group walked to see Ramsey Island.  It's an amazing walk.  We started from Porth Clais very near St. David's cathedral.  In the far distance, we were able to see St. Non's church, the mother of St. David.  It was the perfect day for walking.

As we crested the hill we were able to see the island of Gwales off in the horizon.  This is the island that features in the old Mabinogion story about Branwen and Brân.

It's big story to tell but basically, it culminates in a massive battle with only eight Welsh survivors.  But on the return journey, Branwen dies of a broken heart and the remaining seven travel with Brân's head to Gwales.  The island had the properties that allowed them to forget all their grief and loss.  They would be allowed to stay there as long as they didn't open the door that faced Cornwall.  It was here they lived for 80 years until one day Heilyn ap Gwynn said, "I have to know the truth..." and opened the door and all the memories of every loss, every friend and family missed, every pain and sorrow came back to them.  And from that day on, they could not rest...

It's from the second branch of the Mabinogion, "Branwen ferch Lyr" (Branwen daughter of Llyr)  Great stories from the 1200s... written down somewhere near Abercych, I think.  Written in Pembrokeshire dialect, I'm pretty sure.  Some of the best stories ever told!

Anyway, we saw a couple of seals and a couple of mermaids... well, not really.  Well, the seals were real I'm fairly certain.

The ocean between Ramsey Island and the coast appears to run in two directions.  It's the most bizzare thing ever.

We stopped to eat lunch on a small slope and planted olive and apple seeds.  Hopefully an orchard will grow here years from now.

People trickled off, until it was just me and Ceri "Ffliwt" left.  We stayed quiet and enjoyed the view across to Ramsey Island.  Ceri's foot started to get tired and it was a rough slog home.

On the way back, we ran into three bulls blocking the way, standing right in the middle of the path.  (How oddly Celtic... three mythological bulls...)  They were big bulls too with full sharp horns.  We tread carefully and when it looked like trouble from one of them, Ceri "Ffliwt" started talking to them softly in Welsh and they moved along without trouble.

I met with Elsa a couple of times this week, I think.  We definitely went walking up near the top of constitution hill.  She took us on a side path that was slightly muddy.  It was a bit cold and damp but Elsa was great company.  She told me some hilarious stories about her family.  A proper mad bunch of Welshies from West Wales.

This also may have been the week that Elsa had mice in her car...

When she first said that, I thought either she's joking or she's got some pet mouse in a cage waiting for her.
"So, Elsa, what do you mean there's mice in your car?"
"Well..." she started with a slight blush and I knew then there was going to be a bit of a story.
Turned out the shed where she works got infested with mice.  The little things had gotten into a box of wool.  Now, Elsa could tell the mice had been in there because of the little mice poop in the wool.  Good girl, Elsa, she figured the wool could be recycled and just needed to be washed.

Well, she took the box into her car but shortly discovered that a little family of mice were nesting at the bottom of the box.  Instead of tossing them out, like I would have done, she let them be until she could find a chance to give them a proper home.

Unfortunately, that chance came a couple of hours later.

When she returned to her car, the mice had all vanished from the box and had now, surely, taken up residence somewhere in her car.  Presumably, hibernating inside one of the seats!

Oh, did I ever laugh!

She's not going to trap them either.  She's just going to let them have a nice warm little winter... so sweet!


Strangely enough, a friend of mine back in Canada, Audrey, found some evidence of mice in her car as well.  Ah, what tales...


Right.  Next post, a session with the Swansea crew in Ystalyfera and a Twmpath in Abercych...