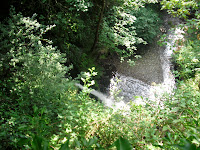 Yes, yes... I know.  Been ages, right?  Well, happily it's because I've been so ridiculously busy that I haven't been able to get to the blog.  Must be at least eight months behind.  I'm tempted just to start in the here and now but so many amazing things have happened that I think I'll try to recount all of that.  Probably will lump a few things together for brevity's sake.

So here it is, imagine it now, last summer, a warm and lovely day, visiting my families old home...

I visited Llangranog mid-week.  I hadn't been in quite awhile.  I had a great visit with Enfys before Gari took me to the Pentre Arms.  We started drinking cider and ran into Jeffrey and Liz Probert, my dad's old friends.  I also met with other local people who remembered my Dad.  They all said I looked just like him.  At any rate, I drank far too much cider but somehow managed to stumble back over to Enfys' house.

Gari and Enfys seem to be doing well though Pwyll is missed terribly.

That Saturday, I came back to Llangranog to see this festival there called "Nol a M'lan".  Elsa was keen on visiting there with me so we went together in her car.  We parked outside of Capelywig and went for a long hike before heading down to Llangranog.

It was wonderful to be able to show Elsa the house Gwalior and the Foel house.  We carried on towards the Foel hill.

We met this woman there who tried to stop us from going to the top of the Foel.  I calmly explained who we were, who I was related to.  She thought Elsa was my partner and we explained that we were just friends.  The woman said, "well, that's how it starts."  Elsa turned beet red which made me laugh.  The woman must have been lonely because she talked for some time.  She had known Pwyll and was quite sad over the loss.

The view from the Foel was incredible mixed with the warm sun and the coconut smell of the yellow gorse... definitely a day for a picnic.  We tried to walk from the top of the Foel back to the village along the coast but even after clamouring over several fences and gorse bushes we just couldn't find a path.  We gave it a valiant attempt but had to turn around in the end.  It didn't matter as it was a lovely day with great company.

On the way back, there was a man working on my great-grandmother's house, Carnowen.  I explained how I was related and the man said he got goosebumps.  We were invited in to see the place.  Matt and Jo are the people living there now with their children.  They were very sweet and kind and gave us a tour of the house.  They've done an incredible job restoring and maintaining the house as it must have once been.  They make wonderful conserves and jams there as well.  Carnowen jam... how cool!  Definitely worth buying...  http://www.facebook.com/Carnowen?sk=info

They gave us a free pot of jam at any rate and I later sent them some of the stories that I knew about the place and its people along with some photos.  They're going to tuck them away for future generations to find...

We eventually made it down to the festival itself... a couple of good bands played.  I can't remember now all of them.  "Bois y Fro" were a small barbershop type group.  I really enjoyed them.  Thought they were quite good singers.  I think the other band I really liked was "Colorama" from Cardiff.  Welsh Indie pop, very tasteful music in Welsh.

The final singer I wasn't keen on.  Quite cheezy-tastic ...can't remember his name... though he seemed really popular with the crowd.  Don't know why they enjoy the cheezy stuff so much...  Buddug showed up later in the evening with her parents.  It was great to see her again as she'd been working on the farm by then... at least, as far as I can remember.  Elsa had to leave early cause she had a gig with Llawer Mwy that evening in the Conrah hotel.

What an amazing weekend!


...
Anyway, that's vaguely all I can remember.  Will do my best to write some more but I've been traveling so much that I can't promise anything.  Also my camera was (and still is) acting up so I don't have as much for photos as I'd like.


Next, onto Cardiff, Cwm Du and the 'Fera Twmpath.