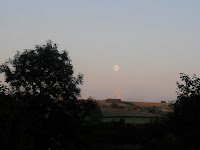 "Life is made of meetings and partings.  That is the way of it." - Kermit the Frog
*sigh...

Well, yes, nearly a year behind now.  If I maybe write a little everyday and summarize some of the weeks, maybe, just maybe, I'll catch up.

I remember playing at Milgi's restaurant in Cardiff.  Milgi's is a vaguely alternative restaurant near Albany road in Cardiff  - very nice vegetarian food.  There's a big yurt set up in their back yard, nice and cozy.  Once every month, a group of story tellers meet and hold court in the yurt.  It's organized by Guto Dafis and David Ambrose.  It was here that I saw Guto play again, and met up with this great story teller Michael Harvey.  They both spoke Welsh.  Michael is from Scotland originally I think.  There was also Nathan (a guitar player I had met at one of Guto's gigs) who played a very beautiful and interesting version of Myfanwy with a cello player.  There's someone who's taken Ceri "Ffliwt"'s lessons to heart.  I was quite nervous for the evening.  It's not often I play solo gigs and I found it difficult.  I met someone very nice named Nicola and she inspired me to sing my Canadian song.  I don't think it was the best performance I've ever done but each gig is a learning experience and a step along.

Guto played some gorgeous tunes on the box.  A wonderful player that should be gigging everywhere.  And Michael is probably the best storyteller I've ever heard and met.  His style is so natural... moments of lightness and humour, darkness and sorrow and joy all mixed playfully in a natural speaking style and comfortable body movements.  Masterful really.  Absolutely masterful.  The two of us played one set together, harp and storyteller, an improvisation.  It was quite cool... though I did manage to take it from the sublime to the ridiculous by a comically timed, harp glissando.  We all had a laugh and Michael (thankfully!) was able to use it to lighten the mood further, and improvised a little side story.  As I said, he's impressive.  It would be great to work with him some more in the future if "the fates allow".


Later that summer, at some point, I was in Cwm Du, in the mud and rain for a twmpath held under a big red and yellow tent.  I played with Jas, Sille and Martin along with Stef and Peni.  The music was amazing.  The dancing was quite humourous, slipping and sliding in the mud.  Elsa was there dancing in her wellies.  She danced with me and sometimes with Dai.  Vicky, Dai's daughter was sick I think.  Huw Denman was there having a great time.  I was over the moon to see Elsa there and her company was warm and interesting as always.

I think it was also around that time that Sille had a big birthday party.  Their little house was absolutely packed to the brim and we played music all night, celebrating Sille's day.  Literally, all night.  I even played some old timey harp at some point!  Phil Drums and Jackie Fiddle were there as well as Ceri Ffliwt, Julie, Elsa, the entire "crew" really... food, cake, laughter, drink - a beautiful moment in time!  A moment of friendship and joy and pure music.  Sille and Martin have always been inspired musically and I can't believe how lucky I am to know these two.  They have good hearts...  Anyway, next morning, all there is to say is, "Tea Saves Lives" - Sille Ilves.

Have I told you to buy one of their "Sild" albums yet?  Surely I have.  If you don't own a copy by now, you should.  I hope they'll be making a third album soon.


There may have also been an Ystalyfera twmpath as well but not fully sure now.  If it's the one I'm thinking of, the dance was lightly attended but all were spirited.  Ieuan was also there with his interesting and off the wall stories.

So what happened next.... was it getting ready to travel??  I think so.

Next, Cwrs Madog and the States...