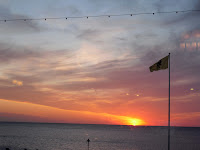 Borscht (beetroot soup) is my favourite food.  Just to let you know...

My dad used to say that Y Gof (the blacksmith) was magic.  That must have been true.  They seemed to have had some sort of secret knowledge anyway.  My grandfather, who was descended from a Blacksmith family on his father's side, was an exceptional poet.  I think he mainly wrote in the old style, using a form of Welsh poem called the Englyn.  Englyn are amazing little snapshots, using only 30 syllables (7+3, 6, 7, 7) and a form of alliteration that twirls in upon itself like Celtic knotwork.

My grandfather, John "Jac Carnowen" Owen-Jones, was captain of a ship and his first mate was his cousin, Jac Alun Jones of Cilie.  Jac Alun was also descended from a blacksmith and his family were quite well known for their poetry at one point.

The two wrote several poems to each other, some of which are published in Morwyr y Cilie by Jon Meirion (mab Jac Alun).


Here's a picture of my grandfather.  He has very kind eyes and I think we look rather similar.

He died quite young and I recently heard that his grave in Buenos Aires is still well kept...

Here's one of his poems that I found in the library...

A beautiful and touching poem...

I'm also descended from the Foel house which was a massive family and through them we're somehow (yet again) tied to the Cilie... though how and when exactly is beyond my memory but both my dad and aunty Susan insist on it.  And when I met Dafydd Iwan last summer, he exclaimed, "Dyn ni'n perthynas!" (We're related!) ...so that's enough.

Strangely, very few of the Cilie descendants were trained in the art.  A very real shame, which leaves me rather unimpressed with the whole affair.  So may I be known for who I am and what I do in place of all else...

I've heard some Irish musicians that I consider to be exceptional.  But for some reason, Irish music itself has never really seemed very interesting to me.  Welsh and Breton music on the other hand, I find fascinating.

For one thing, Irish music, as it's come down to us, isn't that old really.  Diarmuid Johnson Irish flute player, in his book Y Gwyddel, does himself state that Irish music isn't generally older than the 1800s.

Quite a few Celtic books that I've read focus mainly on the Irish tradition which is fine but, once again, to me Welsh literature is far more intriguing, richer, deeper and contains more archaic material...

But before I digress too much, this is what I hear when I hear Irish music.

Quite a few of the Irish musicians that I've met (though not all) seem to approach the music and their instruments in the same fashion I would approach the trombone if I were playing funk music.  Which is to say, in funk music there's only one way to get that sound.  Over blow - absolutely blast through the instrument in order to make the metal (or wood) sympathetically reverberate against itself, then keep the tongue tight against the teeth with very tight, clipped and clean notes and ornamentation (mostly turns and triplets).

That's what Irish music sounds like to me.  Of course, since the music has become divorced from its dance origins, it's often far too fast and, for my taste, much too flashy.  It's not very melodic in particular, which makes it difficult to find chords that work, because basically all chords work... if you catch my meaning.

To me, Welsh music is heaps more interesting.  Yes, there are quite a few rumpty-pumpty tunes played by the usual suspects but on the whole, the best of the tunes are much more melodic, and generally speaking, much more emotive and much more curious.

Plus, it is an older tradition.  The earliest published tunes are from the early 1700s but many of the dance tunes can be traced back to the late 1500s.

And then there's the Robert ap Huw "Peroriaeth" manuscript  ...a manuscript which reflects a tradition that is older than most Celtic music available (written in 1613 but tunes dating from the 1200s through the 1500s).  Although I've heard some try to claim this as marked by Irish influence, it is clearly not.  It doesn't take a genius to see that the music itself is strongly influenced from the continent as well as upholding some native traditions.  Other than a couple of Irish sounding names in two or three of the metres (and the spurious claims of influence from Gruffudd ap Cynan), I'd have to say, very little Irish to be found there.

To be honest though, after a chat with Ceri "Ffliwt" and some intense listening sessions, it seems to me, Scottish music is where it's at (at least some of it).  It appears to hold traditions ('pibroch' in particular) that are even older than the apHuw (though vaguely related), and perhaps deeper.


At any rate, it was this week that I ran into Diarmuid a couple of times.  He had quite an impact on me the last time we had met over three years ago.  And he was to do so once again.

We are, it seems, one and the same.  We are very much alike, except for some accidents of birth and a couple of different choices along the path...

His frustrations mirror mine nearly exactly, though I express mine in a different manner...

He's chosen a difficult path and I don't envy him.  Last I heard he was off to the continent to teach at some University there.

Some paths are straight and therefore seem easy going and safe.

Though mine, at first glance, appears harder to navigate and absolutely treacherous... there's all sorts of interesting alcoves, thick yellow gorse, valleys and meadows, odd and curious bits of rock, bubbling springs, thick moss for which to lie and trees for which to shelter when it rains.

There is no shelter on the straight path, no place to rest one's weary feet.


I wish Diarmuid all the best, where ever the wind may take him.  May our paths cross once again and hopefully, next time, we'll find a meeting place in the void to traverse the music of the spheres together.


Next, recording with Julie Murphy...