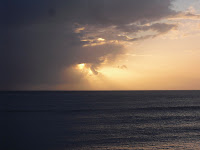 Richard asked me to come visit the Cwps session again, which I decided to do.  And, of course, who I should I run into but none other than the infamous duo, Bjorn and Ifor.

They followed me up the stairs to join in on the English session.

As you know, the last session I'd been to was so utterly nationalistically English that I thought it best this time to go full on and sing in Welsh.  The leader, (I think his name is Mike) pondered about why more Welshies didn't come to the session.  Mmm, me wonders, eh?  But he did thank me for singing in Welsh, so fair enough.

A singer and piano player named Dolly and her London crew were there.  Perhaps all in their twenties.  They were incredible and did lighten up the evening.  Dolly was a fan of Fernhill and was helping to organize a festival out in the mountains.  I had hoped to go but just couldn't make it.  Dolly thought Ifor and myself looked like brothers which made me laugh.  There was an old boy there singing in some crazy Beefheart/Moondog style.  There was also a boy and girl who sang in a 20's style.  Enrique and Kit showed up and Kit sang a lovely Irish song as well.  Very eclectic evening.

Needless to say, Ifor, Bjorn and myself made the most of our reunion.  Somehow, several pints later (though I don't entirely remember how) we ended up at the Angel dancing and head-banging with the Goths.  A sight to behold!  I actually got accepted into their circle for a brief moment.  I think I ate some pizza afterwards but can't be certain.  Epic night!


I played football that Friday with my Celtic friends before going to the Breton dancing.  Gwil wasn't there and the band was over run by non-musicians.  Made for a sloppy night of music, very tricksy to dance along.  And some of the musician guests there had unclean hearts and I could hear it in their playing.  I found it difficult.

Afterwards, I had supper with my Celtic compatriots, the Populista.  Ah, my Celtic crew... I enjoy their company very much!  A good evening.

I think I went to Cei Newydd the next day to visit my Aunty Susan and Elsa.  I remember Elsa and I played some music, visited and went for a bit of a walk.  As always, it's brilliant to play with Elsa.  There's so much I could say about her.  As my old music teacher Bob would have said, "What a voice!"  A beautiful and eloquent musician.

Sorry, my memories of that time have already faded.  I don't think I could add more.

Weeks 11 & 12
I seriously don't remember these next couple of weeks.
I do know that I'd been practicing an awful lot with Nettie and Elsa, trying to prepare for the Abercych Twmpath.  Unfortunately, Gwil was busy and not able to make the gig.  Nettie and Elsa were both pretty nervous... we sat in the car before the gig and I sang "Homeward Bound" with Nettie, trying to keep everything nice and relaxed... and, as it was, we were sharing the stage with Ceri "Ffliwt", Julie, Sille and Martin, so they really did the bulk of the work.  Martin did the calling, thankfully, as I would not have been able to call such a big crowd of people.  I played quite a few tunes with them as well.  Cerddcegin did extremely well for one of our first real outings.  Nettie and Elsa both sounded great and I think they were both, after it was all said and done, very excited to have had such an experience.  Sille said we sounded like pixie music.  Proper pixie music.  I think she's probably right.
I played a couple of tunes with Julie... we've been working on a bunch of her tunes but more on that later...  Anyway, the Abercych Twmpath really is amazing.  As I've written before, a great mix of people.  Simon's created a good happening.
I think we all went to Ceri "Ffliwt" and Julie's house afterwards for a late night jam session which continued the following day...
On my birthday, I decided to hold a Twmpath.  Not really to celebrate my birthday, because I'm not fond of birthdays, but as a way to hang out with my friends and as a way to play with Cerddcegin as a whole unit - Gwil, Elsa, Nettie and myself.  It was a fantastic night.
Mandy and Diarmuid showed up as well as Bethan, Felicity, Jaci, Harriet, Polly and all of my Celtic friends... literally all of them!!  They'd made me these little cakes and everyone brought me presents.  How sweet is that?!  I was really touched by the outpouring to be honest.
I called the dances and I think it went alright.  Half in Welsh, half in English.  And I actually enjoyed celebrating my birthday in the end.  Cerddcegin were brilliant, absolutely brilliant, and my Celtic crew were so kind and generous.  A great celebration.
Elsa and I shared tea afterwards in the original cegin where it all started.  Perfection!

That's the best I can remember for the moment.  It was quite awhile ago...
Next, Irish music and such...
Hwyl.
Posted by gwdihw y nos at 02:51