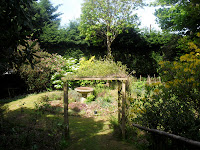 I went to The Party on the weekend.  It was surreal.


But before I get into that, I should say this.

It starts here... about four years ago, I had three or four harp lessons with Siân James.  It was the first time I ever played the harp.

Now, in Canada, one of my "missions" has been to spread awareness of Welsh culture in North America through various methods - handing out daffodils on St. David's day, repeating ad nauseam Llanfair P.G. mid-conversation, recommending Welsh music which to listen, pointing out where Wales is on the map... that sort of thing.

You'd be surprised to know how few people from afar have actually heard about the place... one of the better responses I remember hearing was, "Isn't that in England somewhere?"

So, I've been spreading the word, little by little... Wales is a little country, with a different language, poetry and music...

Anyway, four years ago I had some harp lessons with Siân James... as I said, not many but a few... nevertheless they were very powerful and meaningful to me....  In my previous life in Canada, the conversation would run something like this...

"Who have you studied harp with?"

"She's this great harp player and singer from Wales.  You really must buy her albums."

"Sure.  Okay... now, where exactly is this Wales place?  Is that in England or something?"

You get the picture.  Okay, fast-foward to life in Wales... and listen to this conversation I had with a Welsh woman some months ago.

"Who have you studied harp with?"

Famous?  I really didn't understand and was completely surprised by her response.  I love Siân James and her music... but she's certainly not famous, at least, not in North America.  Does it matter?  No, not really.

Except for this... The once promoter of Welsh culture has turned into a Canadian name dropper.

And there it is.  Perceptions, eh?


I'm telling that story so that I tell you this one... hopefully without the fear of being accused of name dropping...

...because, even I think it's all a bit farfetched.


I was invited by Ceri "Ffliwt" and Julie to The Party.

...was in this great old, rather large, and wonderful mansion house that could have easily been from the set of some old movie - the Welsh Manor, the seat and holder of Welsh culture and tradition.

The occasion for The Party... the completion of a new shed.

The people... well, a lot of Welsh academia... scholars particularly instrumental in the study and proliferation of Welsh folk music and culture...

The host of The Party - Bethan Miles.

Bethan is a viola player, university lecturer, scholar and general collector of ancient and curious oddities.  I had seen her name in a couple of scholarly papers about the Robert ap Huw manuscript before but it took me ages to put two and two together.  Bethan is a character and then some.  But more on that later.

I arrived at the party and was immediately introduced to none other than Daniel Hughes, followed by Meredydd Evans, Phyllis Kinney and Tegwyn Jones.  Okay, you may not recognize the names but essentially every Welsh folk music book I own, has been compiled and edited by these people.  Articles, books, papers, recordings... I'd seen and heard about them all for years and years...

Daniel Huws was once Keeper of Manuscripts at the National Library of Wales, he is an exceptional poet, has published several books, an inheritor of the Welsh plygain singing tradition, editor of several Welsh folk song collections and also one of the contributors to the Smithsonian Folkways album Blodeugerdd.

Meredydd "Merêd" Evans has edited several collections of Welsh folk music, professor of philosophy, historian, once member of the group Wythawd Tryfan, producer and known most notably for recording the classic album for Folkways, Merêd, that has kept alive so many of the Welsh folk songs now in currency.

Phyllis Kinney, an American fluent in Welsh and once opera singer, has also edited several key collections of Welsh folk music and has recently published a new comprehensive book about Welsh folk music.  (Elsa's been going through it and finding all sorts of gems!)

Tegwyn Jones has written several books, most famously those documenting Welsh poetry, ballads and verse.  Julie was particularly thrilled to meet Tegwyn as his book Tribannau Morgannwg as had a big influence on Fernhill.

Meeting them all was an honour...

Then, of course, there was Ceri "Ffliwt", producer of several key Welsh folk albums, a primary figure in the revival of the Welsh bagpipes and pibgorn, founding member of Fernhill, flute player and singer, collector and teacher of music, and the heart of Yscolan.

And Julie, singer, pianist and song writer, has recorded several albums in both Welsh and English, has recorded with the likes of John Cale and Robert Plant and is also a founding member of Fernhill.  The Welsh album that's had the most influence on me is her recording with Dylan Fowler, Ffawd.

And then, there was Diarmuid, the poet, author, translator, linguist and Irish flute player, along with his wife Mandy, traveler and entrepreneur... people I hadn't seen in well over three years or so.  Lowri Telynores was there (I hope I've remembered her name right), playing in the North Welsh style.  And amongst the mighty crew was Christine, fiddle player and adventurer, who moved along un-phased by the company.

And then there was Elsa and myself... I can't speak for Elsa, but I was certainly wondering how on earth I was ever invited to such a thing...

The Party began with a stately ceremony, a march to music in a grand procession to the new shed, willow branches, flowers and dancing led by the Master of Ceremonies, Bethan, and then the ribbon cutting and official opening by Merêd and Phyllis (all a bit tongue and cheek of course)...

And then, we had a full afternoon of music.  Daniel Huws and Merêd exchanged songs in traditional metres, then verses upon verses of poetry and music.  Daniel had a mischievous twinkle in his eye, particularly strong before he would launch into some great Welsh ode.  His granddaughter was there, who spoke lovely Welsh, encouraging Daniel to continue.  Julie and Ceri "Ffliwt" were singing and playing.  Ceri sang some triban songs, Julie some ballads and Christine played her fiddle.  And we played the afternoon away.  I sang my Canadian song for Merêd.  He patted me on the cheek for my effort.  Merêd loved Julie's voice, naturally.  He expressed some concern for the state of Welsh folk music and hoped that some of the lesser known tunes would find their hearing.  The music carried on all the way until supper...

It was epic and is the stuff of legend.  Elsa and I exchanged glances at one point, "This can't be for real, can it!?!"

I recorded some of it.  Perhaps, it'll end up in some library somewhere someday, I'm sure, collecting dust.


Later that evening, after supper, we had another long session.  Diarmuid, Ceri "Ffliwt", Christine, Elsa, Bethan, Daniel, Julie... Bethan taught Ceri "Ffliwt" a great Welsh tune.  Bethan's method of playing is reminiscent of the erhu (Chinese violin), but her tone is deeper and richer.  We played well into the night.

The next day, Bethan taught me some dirty Welsh poems to recite to my Welsh language class.  I won't repeat them here because they are a bit rude but are sooo funny!  I never tire of reciting them as it gives me a great laugh when I do.

And then The Party came to an end. 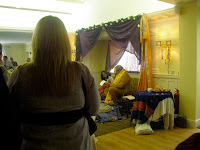 I completed my week with a Hindu christening...

Well, not really a christening... I think more of a naming ceremony except that's not quite it either.  It was a celebration of the first time for the baby to eat solid food.  The ceremony was in Welsh, Hindi and English.  They used smoke and incense for purification.  It really was beautiful.

I basically played background music while people were gathering.

There was one old fellow, I think from Bangladesh, who came up after one of the tunes and told me how much he enjoyed the music and he thanked me for it.  I did the usual musician thing, hummed and hawed, nodded and said thank you.  (It's tough to take compliments as a musician, I'm not sure just why yet.)  Then he stopped me and said, "No.  I really mean it!  Thank you so much for your music!!"  I bowed in respect.  As he walked away he said, "All the best."  I replied, "You take care now."  To which he said with a smile, "I'm well past the point of taking care."


And that was my surreal week.