One Year, Week 7 - Aberaeron and Dolgellau 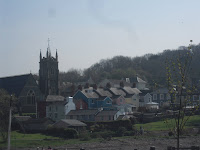 This week I was in Aberaeron trying to create some gigs.  I suppose a strange place to try admittedly.  I had help and loads of encouragement from Elsa though.  Unfortunately, nothing really came of it.  I'll probably try there again later.

On the Wednesday, there was a scheduled Dolgellau session.  I hadn't been in ages so decided to make the trip.

Elsa was eager to make a day out of it.  I think she wanted to experience absolutely everything that Gwil and I had experienced on our many excursions up north.  She even wanted to catch the bus up there with me from Aber.  So off we went, having a nice chat all the way up north.

Our first stop was Y Sospan, the little cafe that Gwil and I used to frequent for tea before teaching at the school.  I didn't have my usual (which was the all-day vegetarian breakfast) but instead had scones with jam and clotted cream with a mug of tea.  It was nice to be back at the old haunt, especially in Elsa's company.

We made a stop at Ty Siamas... thought I'd try getting a gig (again, they're not having it) and the boy behind the counter (I think his name was Ioan, though I can't really remember) suggested that perhaps my Welsh wasn't good enough to play in their little theatre.  He then began telling us how members of the IRA used to meet not that far from Dolgellau.  He seemed a little too celebratory about that.  Not something exactly good for business... or the Welsh language, come to think of it.

So what exactly was that Welshie on about?  Who knows...  It's this sort that are destroying the language though.  A common complaint of many of the Welsh learners I've met, is the fact that they're never really welcomed into the Welsh speaking communities.

I've been more fortunate than most learners as this hasn't really been my experience (...with a handful of exceptions, namely a couple of individuals who've expressed a distaste for me, my journey and my taste in music, but this bothers me little if at all...)  For the most part, I've found Welsh speakers quite welcoming.

So why have so few learners been adopted into the culture?  Your guess is as good as mine...

The thing is, if the Welsh are actually interested in the survival of the Welsh language, they're going to have to learn to reach out to non-Welshies.  They'd be wise to start thinking about Welsh and its place in the global community rather than thinking only of Welsh in the very tiny village of Dolgellau.  The more walls they build trying to keep the rest of us separate from Welsh culture, the more they will kill the language...


Anyway, we then stopped by the Royal hotel on a whim.  It just so happened they were looking for a band... a jazz band unfortunately.  I could have put one together but I haven't found any jazzers in Cardiganshire.  They all seem to live down in Cardiff.  Perhaps I just haven't looked hard enough.  At any rate, I did give them a CD with some Cerddcegin but never did hear from them either.

After that, we decided to try to walk to the session which was at the Cross Foxes... only a couple of miles... all up hill ...with a harp on my back... sure, why not!

Along the way, we ran into some nutter who pulled a full bottle of whisky out of his sleeve and tried to sell it to us.  Quite intense.  Needless to say, we turned down his offer. 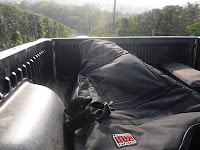 Anyway, as we continued up the hill, I'd already had enough of lugging the harp around so I stuck out my thumb first chance I got.  This super nice fellow with a pickup truck stopped for us thankfully.  Elsa hopped up front into the cab and I hauled my harp into the truck bed and rode in the back with it.  Just like a good ol' boy!  Brilliant!  My harp still carries the memories of that trip.

Because we had caught a lift, we were there quite early.  The manager let us in downstairs to a conference room to practice.  As we played, the owners heard us, came down and asked if we'd play at their pub sometime.  They asked if we'd come up and play on the balcony for starters but also wondered how much we'd charge for an evening.  I told them that there was usually three of us and gave them the minimum price.  The woman looked at me as if I just made the rudest joke possible.  It made me laugh a little!  From the look on her face, I'd be amazed if they ever called us. 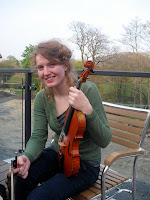 Anyway, Elsa and I played for the diners outside on the balcony.  She must have been very nervous because she suddenly went very quiet in her playing.  It was unusual because she's been especially confident lately.  It can be quite hard though when the nerves take over.  Either way, good practice for the both of us.

We were eventually joined by some others looking for a session.  A jazz folk guitar and his accordion player.  The session got moved about the restaurant a couple of times as we started.  I don't think the owners knew what to do with us all.  It was good to see Gary Northeast, Jem and Phil once again.  I was pleasantly surprised to see Huw Dylan there.  He was up visiting his parents.

I thought he might sing some tunes but he wanted to just take it all in.  Shame, cause I really like his tunes.  He sings this one tune that quotes the anthem which I enjoy in particular.  I've only heard him sing it once but I won't forget it.  Very poignant.  Anyway, we had a great chat in Welsh near the end of the session, touching on the importance of the Welsh language and the varying styles of Welsh folk music.  It was nice to see him once again.

As everyone was packing up, Keith and Elsa played on until the bar manager turned off most of the lights.  Then we drove back to Aber, harp resting on my lap.


It was a wonderful day with Elsa.  I've been hanging with her quite a bit.  The conversation is always easy as she leaps from one exciting topic to another.  And she listens to my nonsense quite patiently and then stops me with a thoughtful word.  She'll catch me out and gently direct me in a different direction.  Digon teg!  And through all that, she never ceases to surprise me, hidden dragon that she is.


We also rehearsed Cerddcegin again this week, this time with only me, Elsa and Nettie.  It was a good one but more on that later. 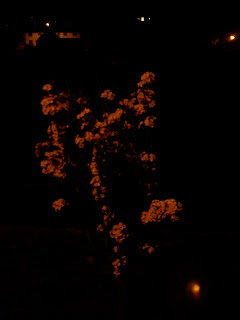