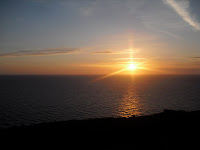 I got up early that Tuesday to catch the bus in to Abertawe and then a train over to Narberth.  Pwyll had died just a few days before rather unexpectedly.  Though as Enfys put, he'd been sitting on the porch watching the ocean when he passed.  No better way to go I suppose.  I had hoped to make the journey down to Llangranog that very week.  A sad loss.  Pwyll's service was beautiful though.  I think half of West Wales was there.  Jon Meirion had written two englyn for the service and there were a couple of beautiful Welsh hymns.


After the funeral felt very much like a celebration.  People gathering together, the whole village, sharing stories.  It was really beautiful.  Many people commented on how much I looked like my dad.  They all spoke to me in Welsh, "O, mab Andrew Gwalior, mab Andrew Gwalior!" (Andrew Gwalior's son!)

Pwyll and Enfys are some of the last originals in the village.  It's a big loss really.

I had managed to hitch to the crematorium with a builder and then after the funeral I caught a lift to the bus stop with the gardener.  I then caught a bus to Caerfyrddin where Martin and Sille picked me up.

The Bethlehem Village Band had a gig in Llandeilo that evening.  There were the four of us, Martin, Sille, Jason and myself.  It was great to play with them.  And we got another gig from it as well.  We were basically playing background music but I seem to remember we played quite awhile.  As always with them, time absolutely disappears until we surprisingly find ourselves at the the end of the evening, a happy light shining from our eyes.  Good tunes, good people, great musicians... a fantastic night.

I think I caught the bus all the way back to Aber the next day.

That Thursday I met with Nettie, Elsa and Gwilym in this little church in Llandre called 'Bethlehem'.  One of many rehearsals we were to hold as we were due to play at the Abercych Twmpath.  It took a bit of time to find tunes that we all had in common.  I hadn't played too much with Nettie before but she's a wonderful musician.  Her squeezebox is ethereal and whimsical, which I think blends wonderfully with Elsa and Gwil.  Together we make manifest the music of the tylwyth teg... pixy music.  Doesn't get better.

The perfect day in Cei Newydd...

That Saturday, I caught the bus with Gwil down to Cei Newydd.  Just like old times, chatting away in the front row.  And then, the three of us met in Elsa's perfect little home, full of interesting books, jumpers and wool socks, arrow flints and painted stones, all bits and pieces laced with history and stories.  For lunch, I made falafel wraps which even Gwil ate so they must have tasted pretty good.  Elsa had cheeses, bread, jam, tea, the works really.  There were stories and laughter, all lightness and air.  We played through a bunch of tunes... it had been a while and I hadn't truthfully prepared but we got through some of the old standards... and I was lucky to get a few on record.  I was in a Monet, colours swirled and pastel hues danced past, delicate brush work interweaving layer upon layer to eventually reveal a soft lily floating in a slow moving stream... 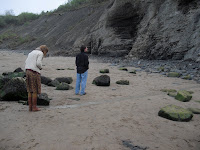 After playing we took a long walk across the Cei Newydd beach. Elsa was collecting stones and she picked up a mangled brick that would later become a candle holder.  A watery fog sat along the beach, making magic the moment.  I was trying to steal pictures of the two of them but they know me too well.  Though Gwil's picked up some of my tricks and snuck a couple of shots that I later found online.

I don't remember how I got home.  I really don't.  Drunk on music, stories and ocean air.


That was my perfect day. 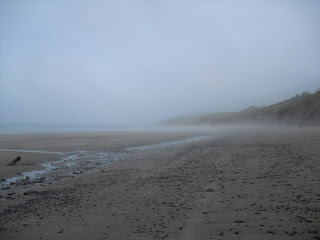