One Year, Week 4 - Llanbadarn and Capelywig 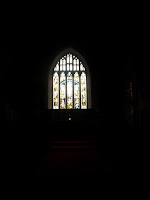 Not much happened in week four as I was still recovering... Later that week though, I had a great session with Elsa.  We went over to Llanbadarn church to play.  The church is a beautiful place with a very long history.  The church was said have been founded by St. Padarn in the early sixth century.  The root meaning of Padarn is Pater or father.  It's more than likely the site was once a pagan enclosure and then subsumed by later christians.  For one thing, the church houses two ancient stone crosses which are believed to be pre-christian but were subsequently re-used by the christian community.  The church itself was rebuilt a few times over the years.  I think the main structure was built in the 1200s.


Sulien, the bishop of St. David's between 1073 and 1085, is also associated with church.  It's a fair guess that the piece in the apHuw manuscript "Caniad San Silin" is in reference to this Sulien.  Although, it would seem more likely to be a dedication to the 6th century Saint Sulien, originally from Cornwall, who was said to have established a church in Corwen, northeast Wales.  Which ever Sulien it was written for, the tune is assuredly the oldest in the manuscript.  Probably the only one to predate the 1300s.

Llanbadarn was also visited by the great poet Dafydd ap Gwilym in the 1300s.  He wrote a poem about the church, in which he describes going there only so he could ogle the women.  "Merched Llanbadarn"  in which he complains that none of the women will sleep with him.  He wrote about staring at one lovely woman in particular, every Sunday.  How great is that?!  Utterly brilliant! 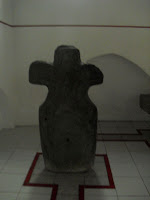 William Morgan (1545 - 1604), the man responsible for one of the first translations (possibly 3rd) of the bible into Welsh, was once vicar of this parish.  He finished his version in 1588.  Of course, this was only made possible because Queen Elizabeth I approved it in parliament.  She wanted to ensure the Welsh stayed Anglican and so in 1567 she ordered a translation to be completed.  This is worth remembering.

Along the floor is marked an entranceway to the Gogerddan family vault.  I don't know who they were but it sure looks cool.  Wait... I just did some digging.  They were a fairly powerful family at one point.  They had settled the area as far back as the 1300s but Gogerddan, the estate itself, was built in the late 1400s.  The last baronet died in 1962.  After being in the family for over 600 years, the estate was then sold off.  That's alright though.  The Gogerddan Arms, a nice little pub, is still around just across from the church.  There's an Irish session there but I've only been to it once.

There's also a plaque in the church which commemorates the life of the antiquarian Lewis Morris (1701-1765) , the man who rediscovered the apHuw manuscript.  I had visited his old farm last year as well.  (I think Aunty Susan told me that some relative of ours from way back was friends with Lewis Morris but not entirely sure...)

As you can see, this church is a fairly significant site.  And what better way to celebrate that, than to play some beautiful music there with Elsa.

Elsa taught me a couple of great tunes she found in Ifor Ceri's manuscript.  The tunes were unbelievable, a testament to the massive and largely untapped wealth of Welsh folk music sitting in the National Library.  Elsa and I have met several times, working on tunes or just having tea.  The more I hang out with Elsa, the more I'm sure she's a genius.  I'm quite certain now.  She moves so swiftly between creative ideas, it's a real job to keep up.  Being around Elsa is a beautiful and stirring experience.


I sang in Cor Cyd at some point.  It's a fun little choir.  Everyone speaks Welsh though not very many learners seem to attend, mainly just fluent speakers.  It's pretty tough to understand everyone.  One fellow beside me talks throughout most everything during practice.  Quite funny!  He's a good fellow though. 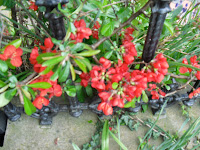 I think it was during week five, I met Aunty Susan in Cei Newydd.  We bused to Brynhoffnant and walked down to Capelywig.  I was helping her to clean the graves once more in preparation for Sul y Blodau (Sunday of Flowers).  I haven't been able to visit Aunty Susan in some time, so it was lovely to catch up.

I hadn't been down to Capelywig for some months.  I realized how much at home I feel in this part of Wales, south Cardiganshire.  I really enjoy Aber but if I ever have the chance, this is the area I would settle.

Right, onto the rest of my travels.
Next, Ystalyfera, Abertawe, Ty Tawe, Mumbles and Gwyr...