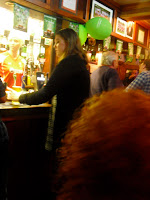 It was a bit of a night at the Cwps.  I think we were watching some rugby game but I can't remember who was playing.

Many of the usual suspects were there... Ian, Hynek, Buddug, Eleri, Ifor, James, Huw, Sam... would have been a full house if Bjorn was around.  Anyway...

Before I forget, here's a mystery solved.

Well, maybe not conclusively, but a definite maybe.

I was chatting with Hynek (from the Czech Republic), telling him about my mom's family and where we thought they were from.  He knew instantly what I was talking about, all within a couple of seconds of me saying it.  He even knew the Welsh word for their language.  Here's the English.  Rusyn or Ruthenian.  A minority group mostly in west Ukraine but also found in Slovakia, Hungary and Romania.  How cool is that?!  I was later telling Martin about it and he thought the language was sometimes referred to as Galician because that area in the Ukraine is called Galicia.  And as it happens, my mom's dad was from Galicia... at least, as far as I know.

So, there it is... Ruthenian.  Still couldn't say with certainty, but it would seem likely.  Very, very interesting! 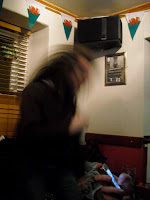 It did turn pretty wild that evening.  Mostly in the Cwps but eventually we made our way over to Rummer's to watch some Blues cover band.  James, Huw and Sam left a bit early.  Buddug and Eleri were a riot and Ifor was in top form, from what I remember.  And Hynek started dancing in the Cwps, full on head banging.  Brilliant!

Dancing, drinks, laughs... all in Welsh as well... all in all, a seriously good time.


I've been playing some football (soccer).  I'm fairly out of shape but still it's loads of fun.  It took me a couple of games to get my legs back.  I really enjoy playing sports, though I'd forgotten.  (One of my favourite games of all time is badminton, but I haven't played in years.)  The first football game I went to, there was this fellow named Kosh, who drank beer and smoked through the whole match.  That was pretty funny.  Quite a few of the Celtic studies people are playing but more on that later. 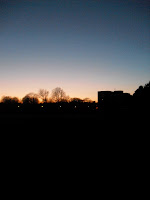 Elsa came over a couple of times.  We had a little time for some tunes.  She's so generous and gracious ...always bringing over some sort of gift... sometimes waffles (not belgium), homemade jams, bread and sometimes cheese.

After one of the Aber Parti Dance nights, Gwilym, Elsa and myself played through one set of tunes together, and it was so beautiful.  It was like being wrapped up in a cozy blanket...

Then I got terribly sick for nearly two weeks, mostly stayed in bed.  I was supposed to meet up with Harriet but I just wasn't able.  I also missed a visit with my cousin John unfortunately.

And that was about it.

Next, I travel all over the place... Capelywig, Ystalyfera, Abertawe and the Gower...