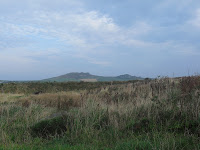 The Bethlehem Village Band started rehearsals for the christmas.  Yeah, it was a bit early but then we were trying to record an xmas album after all.

After the success of our debut at the Bethlehem Christmas fair the previous year, we figured we'd be silly not to record.

Of course, it felt completely mad to be playing Christmas tunes in September.

It all went fairly well though.  It was Jas on pipes and flute, Martin on bouzouki, guitar and squeezebox, Sille on hiiu-kannel, hurdy-gurdy, voice and fiddle, me on trombone, voice and harp and a great addition to the band, Chris Reynolds on lead vocals.  Chris (whom I think you've met in previous blogs) has a great natural and rich voice, a good sense of humour and is a great Welsh language teacher that I first met on Cwrs Madog in Albany New York.  It was awesome to have him with us!

We arranged both Welsh and English tunes in all sorts of crazy arrangements of instruments, though my favourite, "Mary's Boy Child" didn't make it on the list.  The recording itself was pretty intense - I know I wasn't quite ready myself - and we were basically recording the whole thing live.  Not much room for error.  We also, due to money constraints, had to pack the whole thing into only two days or so.  Very difficult.  Nevertheless, I think we made a good album in the end.

If you're interested you can check out the Bethlehem Village Band and the album here:
http://bethlehemvillageband.weebly.com
We've done well since, mainly playing for twmpathe around south and south-west Wales.  I don't see these friends anywhere near as much as I'd like but life's been far too busy lately as I'll eventually explain.

Elsa and I played at the Queens that month.  This may have been our 2nd or 3rd time there but it seems to have been the start of regular gigs.  Rose and Spen were (and have been) incredibly supportive of us and our music.  They are people with good hearts and generous to a fault.  I love being at the Queens.  Great food, proper old pub with real character, second-hand books line the walls, great locally brewed beer and cider... there's nothing comparable anywhere else.  To the family at the Queens, our biggest thanks and gratitude!

Cerddcegin later played a twmpath in Tyddewi to help Huw raise money for the Urdd Eisteddfod which was to be held in 2013.  We played for two twmpathe that day - one in the afternoon for two lots of school children and one in the evening for the adults.  The twmp with the kids was one of the hardest things I've had to do, and many of the teachers weren't willing to help - though thankfully one of Huw's friends, a retired tutor, helped loads in the end and rescued me from chaos.  The evening went much smoother.  This day Gwil didn't make... he had decided to head onto Merthyr.  We were all crushed at the time.  We missed Gwil, both his company and his dancing expertise - but, in the end, we managed to hold our own.  Bjorn, Rob and Jane were all there helping as well as Huw.  It was another great weekend with Huw's parents who are great characters, full of stories and laughter.

Later that week, we played with Llawer Mwy at a fresher's week twmpath in Morlan.  A good chunk of band was there with Nigel calling - calling dances I wouldn't dare dream of attempting, all with grace and confidence - and Keith leading the way on fiddle and box.  Keith has an extraordinary amount of Welsh fiddle tunes at his finger tips.  Most of us just sort of hang on as he pulls tunes out of the air.  Keith's been a big source of inspiration to all of us and how he finds the time while doing all that farm work, I'll never know.

I did mention that Elsa and I started seeing each other.  She's such a fascinating and beautiful person - her mind creative and as quick as lightning, she sees all the tangled webs of every song, story, person and place.  She is a wonder and a goddess.  And I have been the luckiest person.

I don't know... life is strange often.  And often hard.
But somehow, I keep landing on my feet and all sorts of beautiful experiences have occurred along the way. I suppose part of it is being willing to take the risk - maybe it helps to be flexible and be steadfast all at once.